We are fully aware that many online purchases that have been ordered/bought, since our launch in November 2020 , are still in the process of arriving in the UK from manufacturers based abroad.

Covid has affected the delivery process, due to manufacturers’ closures in Italy and the UK, and since the 1st January there is additional administration for goods from Europe.

We are putting as much pressure as we can to get items  so we can get them to you as soon as possible.

We can only apologise for the delays and will use this experience, to improve our service to deliver online orders in an efficient and timely fashion in future.

We are very grateful for your patience and support in this matter, please bear with us so we  get your items to you.

The Football Association have issued a brief update following a recent survey of Step 3-6 clubs covering preferred ways forward in the light of the covid-19 pandemic:

“We would like to provide an update in relation to the recent survey sent to clubs at Steps 3 to 6 of the National League System.

Our alliance and leagues committees now have a large amount of data and information to consider before determining a proposed way forward. Ultimately any proposal made by the committees will be put to our council for consideration. The council will then make any final decision on a way forward.

The alliance and leagues committees recognise the desire for clubs to be updated whilst these issues are being carefully considered. Therefore, both committees commit to providing updates to leagues and clubs as the process progresses; and remain mindful of the difficulties faced by clubs at present. Further information will follow in due course.”

Enfield Town supporters will be updated as quickly as possible in due course.

Town defender Jon Muleba has joined Vanarama South club Hemel Hempstead Town on a dual registration basis. The Tudors continue to play behind closed doors at elite level and Jon will be available for their scheduled home league match against Oxford City tomorrow (Tuesday 19th January). Manager Andy Leese said: “We were approached by Hemel who said they were in need of a full back, and I am happy for Jon to get some game time while we’re not playing”. 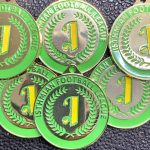 Pitching In Isthmian Chairman Nick Robinson has written to all clubs about Covid and the way forward:

Supporters will be updated in the light of the anticipated FA survey of club views.

The Pitching In Isthmian League have today communicated with their member clubs as follows:

“The Board of the Isthmian Football League has, together with our fellow Trident Leagues, reviewed the implications of the latest government lockdown. The matter was also discussed at length by The FA’s Alliance Committee earlier this week.

In order to reach a decision that will apply across Steps 3 & 4 in the National League System, and which is informed by the views of all clubs at Steps 3 & 4, you will shortly be asked by the Football Association to provide your club’s views on whether the 2020/21 season should be terminated and, if not, what the alternative should be. This will take the form of a short survey.

Independent of that survey, all three of the Trident League’s boards hold the view that the season should cease immediately and be declared null and void.

The ultimate decision lies with The FA Council, following a proposal made by the Alliance Committee but no proposal will be drafted until Clubs’ views have been collated and assessed.

In the meantime, the Isthmian Football League is postponing all fixtures up to and including Saturday 6th March since there is no suggestion that the national lockdown will be lifted prior to said date.”

The League will continue to provide its Member Clubs with updates as and when it is able to do so. Enfield Town supporters will be updated similarly. In the meantime, take care and stay safe.

Further relevant announcements will appear here in due course.