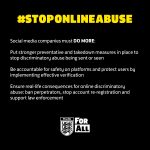 This weekend we are coming together with other sports and organisations, to boycott social media and demand change.

Pablo Triguero, a Spanish student and contributor to ”Afición Deportiva”, a sports website with a primary focus on football, approached our club a few weeks ago saying that he was very interested in our ethos and structure. Former director Ken Brazier provided Pablo with some background and when he said he was keen to interview a player, Sam Youngs kindly stepped up to the plate. Here is the link to Pablo’s fascinating Q and A session with Sam

A lot more needs to be done to punish those who use social media to racially abuse footballers.

That was the message delivered by our own Jeremiah Gyebi who represented the club at the recent Enfield Stand Up to Racism meeting conducted via Zoom.

In a powerful address to delegates, Jeremiah said the growing problem of racism has to be stamped out and denounced those who use anonymous accounts to hurl racist comments on-line yet somehow get away with it.

“Anyone can create an account with a fake name and fake picture and go and abuse a player,” said Jeremiah. “There should definitely be something in place whereby if you sign up for a platform, you have to identify yourself properly, maybe with a passport or driving licence. That way the culprits could be tracked down and prosecuted.”

Jeremiah, thankfully, has not experienced any racism so far in his career but sympathises with professional players such as Wilfred Zaha of Crystal Palace who are getting tired of taking a knee without seeing any tangible results.

“I am still for taking a knee but it’s not enough to eradicate racism in football,” he told his audience. “I sometimes feel it has been put in place just for the sake of it. It’s the right thing to do but it’s not enough. If a fan is caught being racist there should be harsher penalties. Maybe even a lifetime ban, something that can scare others other into not being racist.”

Jeremiah would like to see organisations like Kick It Out do even more to get the anti-discrimination message across. “I remember when I was 17 attending a workshop given by Kick It Out.  Thinking about it now, four years later, I didn’t feel that they went deep enough into the subject in terms of how to stop it.”

“Enough is enough. Let’s be honest, if a white player has a bad game, he just gets told he’s not good enough. But when someone uses the colour of your skin to justify why you’ve had a bad game, for a young player to experience such a thing – perhaps a teenager making his debut – that’s beyond me. It’s time for black footballers, when they step out on the pitch, not to have fear about being racially abused.

“The same goes for players’ families who are also abused on social media. It’s unacceptable in 2021 and, believe me, it has a huge effect on the player. No-one wants to go out on the pitch if they think their family might be abused if they make a mistake.”