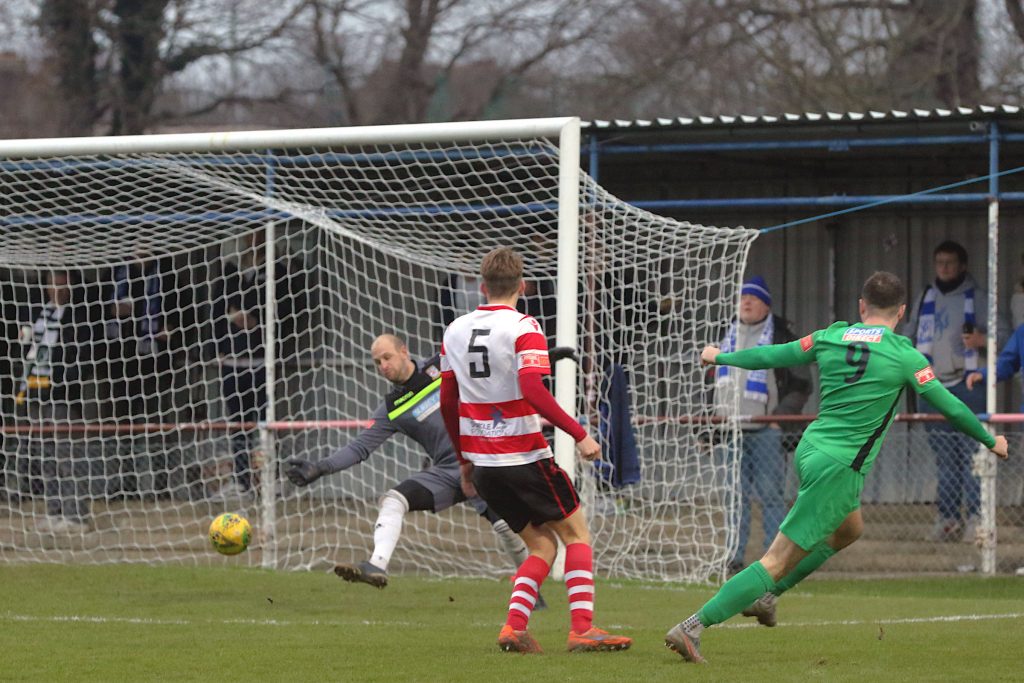 Having rested several players in the 3-1 midweek win over Bowers, Andy Leese reverted to something close to his first-choice side and formation for this crucial six-pointer, with Ryan Kirwan, Percy Kiangebeni and Lyle Della Verde recalled to the starting line-up. Lee Chappell also returned at right back after a three-game absence.

Kingstonian were the first to settle, spreading the play across the midfield and putting in several dangerous crosses.

Town, however, opened the scoring after 18 minutes.  Mo Faal won the ball on the left and played in Percy Kiangebeni, whose low cross was smashed gleefully into the roof of keeper Rob Tolfrey’s net by Jake Cass.

The Ks hit back rapidly, and Daniel Ajakaiye had already lobbed narrowly over Nathan McDonald’s crossbar before they found an equaliser on 22 minutes, Fabio Saraiva netting from the edge of the box after a well-worked move.

There was no time to breathe however. Four minutes later, Mo found himself in behind the Ks’ backline, and, with appeals for offside going unheard, beat Tolfrey with ease.

The next goal was always going to be crucial and Mo was once again on hand to provide it. The outstanding Cass (what a signing!), who had already drawn a decent save from the Ks’ keeper, again burst through the home defence before presenting Mo with another chance, which our top scorer gobbled up gratefully.

Things then calmed down a little for the remainder of the half, with only a speculative long-ranger from Rian Bray to inconvenience Tolfrey.

Any thoughts of consolidating the lead in the second half, however, disappeared rapidly out of the window.

A mere 22 seconds had passed when Lyle Della Verde shot over from the edge of the box, and within another minute it was 4-1. Sam Youngs’ neat through ball sent Cass (pictured) galloping into the box for another emphatic finish.

Cass almost completed a hat-trick on 54 minutes, but Faal’s low cross from the left was diverted out of his reach by a desperate lunge from Simon Cooper.

But the scoring didn’t end there, far from it, as Della Verde netted with a glorious left-footer from 20 yards as we romped into a scarcely believable 5-1 lead.

Although the home side continued to play neat football on both flanks, Town’s defence was not unduly stretched – until Kingstonian suddenly reduced the arrears. Not once but twice.

The hard-working Ajakaiye pulled one goal back on 77 minutes, and Saraiva made it 3-5 with one minute of the 90 remaining.

The result was never in doubt however, although Andre Coker managed to get himself sent off for two yellow cards in four minutes, an annoying conclusion to a massively enjoyable away day for Town’s vociferous travelling support.

“What a performance, nothing short of fantastic. To put that score on the board against a top-five team is scarcely believable,” said a jubilant Andy Leese after we reached the landmark target of 50 points.

“In every department we were superb, from one to 11. It’s given us a huge confidence boost and will live long in the memory.”

“The front three were different class and Jake led the line really well. I don’t remember him losing a header. The back four were superb especially during spells of their pressure in the first 15 minutes and a 10-minute spell in the second half. And in midfield, Sam Youngs has been playing well for weeks.”

“My only disappointment is the two late goals we let in because goal difference could prove so important. But overall, fantastic. What finishing and we could even have scored more.”

“These pitches can sap your strength, especially the way we press. Some of them were puffing at the end  so it will good to get a small breather at the end of January.”