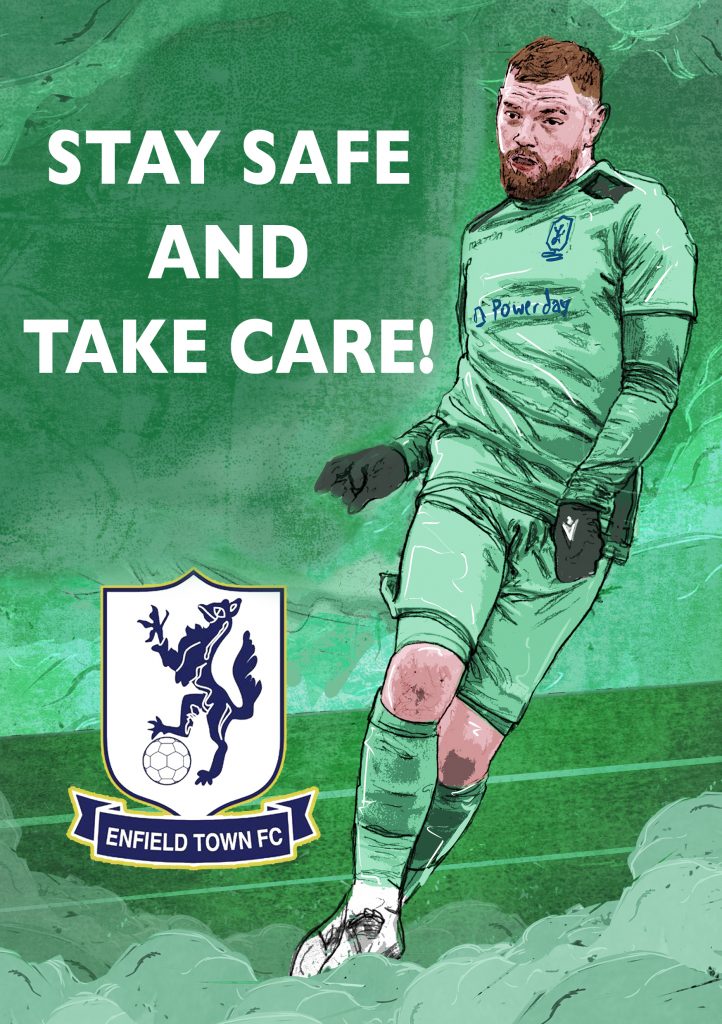 On the day that Town were originally scheduled to be playing at Corinthian-Casuals (4th April), manager Andy Leese has some thoughts on the season gone and the one to come…

Hi Andy, first of all, what was your reaction and overriding emotion when you heard the ending of the Isthmian League Premier Division 2019-20 season officially confirmed?

I was a little bit surprised that the decision was made quite so quickly to be honest, but my overriding feeling on reflection was that it was the right decision on many grounds. The health of all of us in the country has to come first and there was no way we could continue to play with no realistic end in sight to the COVID 19 crisis. To have tried to finish this season fairly, and to start next season late maybe, would have potentially spoiled two seasons. We could be playing again in July for example when we would need a pre-season again to finish this season, which is when we would usually be starting pre-season for the 2020-21 campaign.

I can understand the reaction of clubs that think they were definitely in line for promotions and the perceived lost investment for the whole season. We could all argue that we have lost investment. Many were looking for a formula, like points per game, to resolve matters but I am not sure that would have satisfied everyone. Especially not us, as I think we would have finished 6th!

The finances of running clubs also played a part. Clubs with lots of contracts to honour and no income, would probably have had to extend those contracts indefinitely to retain players ahead of the season starting up again. Clubs with nothing to play for in a League could choose to release players on contract and then play anyone just to complete fixtures. All this would all have challenged the integrity of the competition. There are also plenty of other overhead costs for clubs to consider as I know we have at the Town. It’s probably the right decision now and it will be shown to be so in the long run. We all have nothing without our health.

Aside from the disappointing premature ending to it, how did you think the season went as a whole?

I thought it was playing out to be a very interesting finale over the last few games as we were in a good run of form having reverted to a solid basic system again after a few poor performances in February. I believe we would have gone on to make the play-offs with almost everyone back fit and having put a stop to conceding avoidable goals. Despite our great start to the season, we conceded too many, far too easily, from November onwards. Our League form until the end of November was generally excellent and we were rarely out of the top five. We had some memorable cup performances as well, and the Rushden, Braintree and Maldon games stood out for me as complete team performances. The major disappointment was losing at Chichester when a number of injury issues conspired against us, although we could still have got a replay.

It was tough losing Mo when we did, but it was also great watching him in action while he was in a Town shirt as I’m sure it was for supporters. We added players as the season went along, and that improved us, and I would like to think that those players will stick with us and give it a go again. That said, no team in the land of course will know right now what resources they will have when they finally get back to normality.

How are you keeping in touch with the players, and how are they bearing up?

I have spoken to most of them, on and off, since we finished. They are obviously all in the same position, working at home if they can and looking after families. I know they are keeping fit as they do that as part of their usual routine as dedicated semi-professional footballers.

And how are the management team, and what sort of conversations have you been having?

They are all keeping well and in good health. They all have young families which keep them very active! We talk as a group about everything football, but needless to say there isn’t too much happening right now. I have been advising them that I’m getting myself fit and I think they have fallen for it so far!

Have you spoken to other Isthmian Premier managers? What are their thoughts?

I have spoken to a few. They all feel as I do, really – a bit let down that the season should end without a conclusion, but recognising that there was no magic bullet to solve it to everyone’s satisfaction.

Probably the 2-0 home win against Bognor in February after the Hornchurch debacle the previous week. They were in good form, we had just had been beaten heavily. We gave a complete performance in difficult circumstances and re-set our targets with a satisfying win.

There were a few! I guess it was the FA Cup game at Chichester because of what was at stake. I am not taking any credit whatsoever away from Chichester, who showed what a good team they were. But we could have taken a draw and I didn’t recognise where we were in the game in the last 15 minutes with the players we had out there on the day. The last 0-1 defeat was a hard lesson to take.

It may well be a very premature question, but do you envisage keeping most of the squad together for 2020-21 (whenever that may start)?

There are a number of key players who have indicated that they want to stay at the club, which is very pleasing. They enjoy it here and can see what we have built. It is impossible to have meaningful conversations with the lads at present as we have no idea when things will start again or the resources that we will have available. No time is wasted though, and we have plenty of time to talk.

How have various recoveries from injury across the squad been going?

James Potton is doing ok. His operation went well and John Abbott is leading him through his rehabilitation. John thinks he will be back for next season which would be fantastic news as he is the one player the fans never saw enough of this term. James is a match winner and I hope we see him back in action.

Lewis Taaffe is ok as well. He has been blighted by injury which affects him mentally as well as physically. The rest now will do him good and I hope he comes back in fit and raring to go. He is another match winner and a great character to have in the squad.

Jack Hockney is also back fit as well after a major operation and working with John to recover over nearly 10 months which takes real discipline. I hope we see Jack back here in action as well, fully recovered, as I know what he’s capable of. I think that’s all the injury updates, although I know Mario is keeping an injury under the radar following a return to action recently in Vets football. He will need plenty of time to recover at his age!

Could you maybe pick out one or two players from the truncated season that pleased you specifically?)

That’s a hard one to answer! Junior has matured this year, has a great attitude and looks a complete player now. Ken Charles started the season well, had a dip with injury, but came back strong and I thought he looked to have stepped on again in the last few weeks. Joe Payne in his first full season had to adapt quickly to playing three games a week and will be all the better for having had almost a full season of playing.

Well, I hope we see this COVID crisis clear up and not return so we can all get back to some normality. I imagine we will start the League with all the same teams again and our planning will be the same with modifications where we learn what works and what doesn’t work in training, preparation and match days. I am sure we will see other changes around the club with the new Academy in place, but it’s really far too early to know what else will change.

And finally – and many thanks for your time, Andy – a message at this very difficult time for Town supporters?

Keep safe and healthy, not least so you can return to support us when the green light goes on again for football to resume! Football will return, we will get back to winning, we will be successful again, but for now make sure you all look after yourselves and your families. Stick to the rules and we will all get through this!Share viaFacebookTwitterhttps://www.enfieldtownfootbal