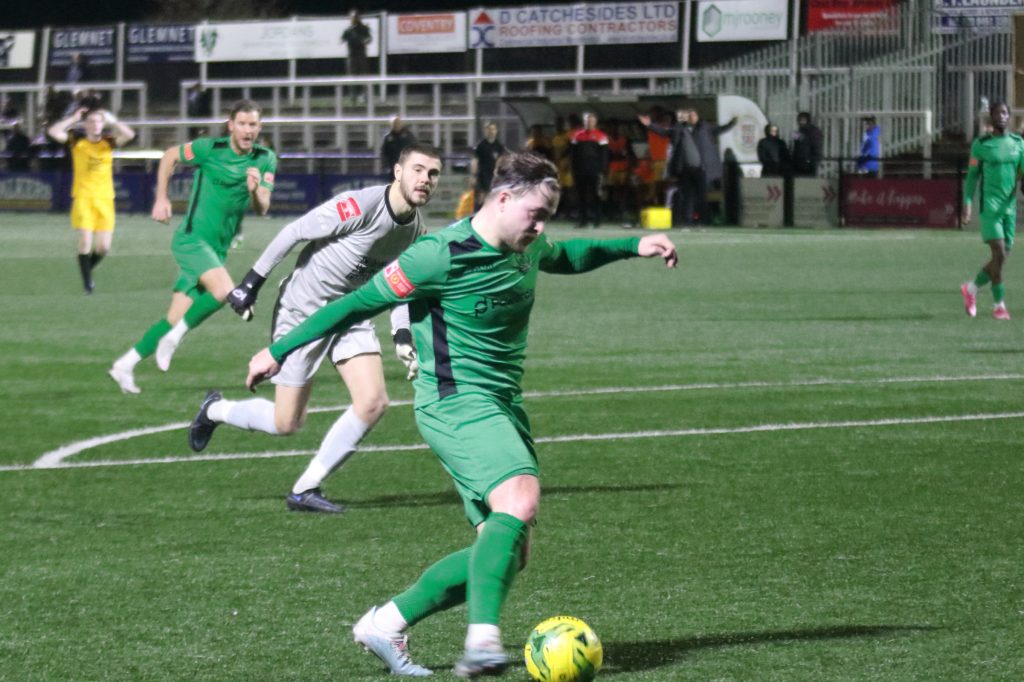 Where on earth do we start?

Crazy game, both defences at times non-existent but fantastic entertainment – especially for the neutrals.

In the end, we came away with a point on Monday which, on the balance of play, was probably about right.

If you score four goals away from home, you expect to emerge victorious.  Equally, hitting back from 4-2 down could prove crucial come the end of the season and actually pushed us up one place in the table.

Cray have a new manager in Grant Basey, whose tenure began 48 hours earlier with a good away win.

They are a far better side than their lowly league position suggests and they came at us straight from the kickoff when we were caught napping by a well-worked freekick, the ball cleverly switched from right to left and the resulting cross turned in by Chris Dickson.

We had another scare on 19 minutes when Dickson seemed certain to double Cray’s lead, only for his shot to be deflected off Nathan Smith.

Three minutes later, slightly against the run of play, we were level.  Andre Coker, back in the starting line-up and looking sharp against his old club, stooped to convert Lyle Della-Verde’s cross.

This should have settled us down but instead, all our good work was wasted as Cray restored their lead. Dickson’s shot was parried by Adi Connolly, once again standing in for Nathan McDonald, and Jamie Yila supplied the finish.

By now, we were being worryingly stretched with pace though with the ball we looked a constant threat – despite Mo having one of his quieter games.

Sure enough, six minutes before the interval, we were again back on level terms through a superb piece of skill from Della-Verde.

With no other option after receiving the ball, he  swept into the area and finished brilliantly from the tightest of angles, Salah-style!

The game continued at a relentless pace with John Muleba replaced by Lewis Taaffe at halftime and Percy Kiangebeni switching to right-back in a tactical move.

It didn’t seem to have the desired effect when dangerman Yila squared the ball across and  Cameron Brodie took advantage of more slack defending to put Cray in front for the third time.

Within moments it should have been 3-3, only for Coker to choose the wrong option by going for glory instead of passing to Mo who was totally unmarked in front of goal.

We were soon made to pay when Cray seemed to have made the game safe, the luckless Ryan Kirwan turning the ball into his own net when trying to clear.

One felt for poor Connolly, who was given precious little protection and could do little about any of Cray’s goals.

It could have been even worse when Cray had a legitimate claim for a penalty waved away after Yila cut inside and looked to have been clipped by Nathan Smith.

Yet for all our defensive deficiencies, without the unavailable Harold Joseph, we showed character in abundance as once again we regrouped.

In what was surely one of his most effective  displays of the season, Taaffe reduced the arrears in the 76th minute when he burst into the area and converted Mo’s cross.

His desire was there for all to see as he picked the ball out of the net and ran back to the centre circle.

And with three minutes of normal time remaining, he became Town’s saviour, pressuring the Cray keeper into a mistake and placing the ball into an empty net (pictured).

In the end a point didn’t serve us too badly as we moved up to fourth with a massive six-pointer to come against Lewes on Saturday.

“It was another frustrating day where our defending let us down,” said Andy Leese. “Early mistakes set the tone and gave the lively Cray forwards line plenty of hope.”

“That said, we showed great character again to battle back for what looks like a good point  in light of other results.

“We shouldn’t be scoring four goals away from home and not winning. We have more work to do to tighten up our shape as a team.”