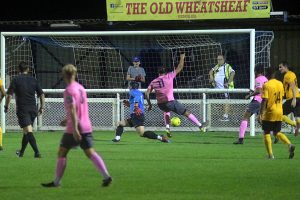 Town’s Covid-19 limited-spectators pilot event was a success with the start of the league season against Lewes in mind the following Saturday, although on the field a mixed Town line-up were eclipsed by an efficient Borough, who were clinical in front of goal.

Borough netted in the 6th minute with a well taken volley after the ball had been played in from the right and was only half cleared, and it was 2-0 after 10 minutes with a long distance effort from about 25 yards.

Lewis Taaffe tried to get things going with some purposeful runs down the right, but he was crowded out effectively most of the time.  And there was no way back for the hosts when, in the 26th minute, a loose ball was driven home from just inside the box.

Town came into it a bit more after the break, and a Ryan Blackman free kick curled just wide.   A Trialist fired home to give the scoreline an air of respectability twenty minutes from time but, in truth, Borough were well worth their emphatic win, hitting the crossbar with ten minutes left with a powerful free kick.