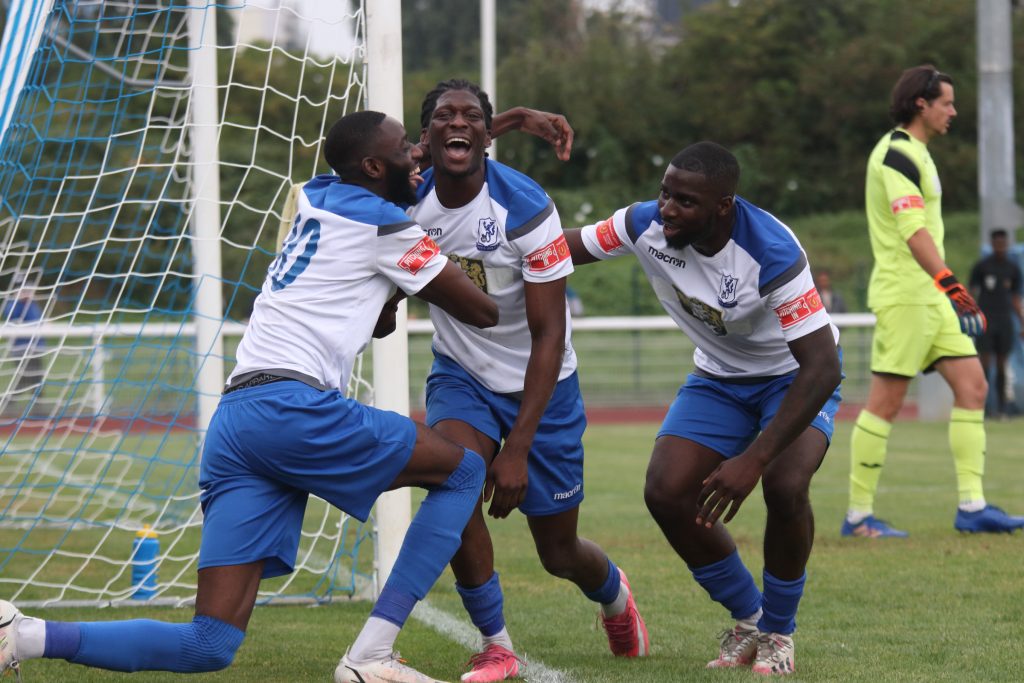 Two goals from Andre Coker sent us into the 2nd qualifying round of the FA Cup on Saturday at the expense of Step 4 Dereham Town but we had to survive an anxious last few minutes.

All eyes will be on Monday’s draw after we prevailed 2-1 against spirited opponents who never gave up after being given a late lifeline.

For once, Mo Faal’s display  was overshadowed by that of Andre who put in a scintillating man-of-the-match performance to fully justify his selection and on another day might have had a hat-trick

Our visitors from one level below started on the front foot with half-chances from Adam Hipperson and David Hinton, the first effort held by Nathan McDonald at the second attempt, the second fired over the bar.

It wasn’t long, however, before we pushed Dereham back as we imposed our superior skill and fitness.

Mo’s dipping volley on nine minutes was brilliantly tipped over by Elliot Pride and moments later, Mo turned inside an opponent and drove just wide as Dereham’s defenders backed off.

Dereham, with Andrew Fisk anchoring their midfield, still looked threatening on the counter-attack and Nathan McDonald got down low to save from Rhys Logan.

But Town’s superiority finally told four minutes before the break. Long throw specialist Lee Chappell mixed it up and went short and Coker was on hand to volley in Percy Kiangenbeni’s cross.

A melee in first-half stoppage time showed just what the tie meant to both sides with the prize of being in the hat for the next round at stake.

Just after halftime another Coker effort was cleared off the line, the Dereham keeper palming away Sam Young’s goalbound follow-up.

Town were now well on top but it seemed that every time we went forward we were caught offside by a canny defence.

Coker was not to be denied, however,  and notched his second on 62 minutes, rifling the ball home after great link-up play with Adam Cunnington.

Six minutes later,  Towners fans got their first glimpse of the returning Lyle Della-Verde when he came off the bench to replace the tiring Cunnington.

But shortly afterwards, against the run of play, the visitors from Norfolk halved the deficit as Toby Hilliard finished off their best move of the game.

Goals do wonders for confidence and suddenly Dereham sensed they could force a replay and upped the tempo. As a result, Ryan Kirwan was introduced to stiffen the defence as Coker was replaced, gaining a warm and deserved ovation in the process.

Faal almost made it 3-1 in a stoppage time counter-attack, only to shoot over. But with almost the last action of the game and with McDonald off his line, a speculative Dereham lob was thankfully off target — much to the anguish of our opponents.