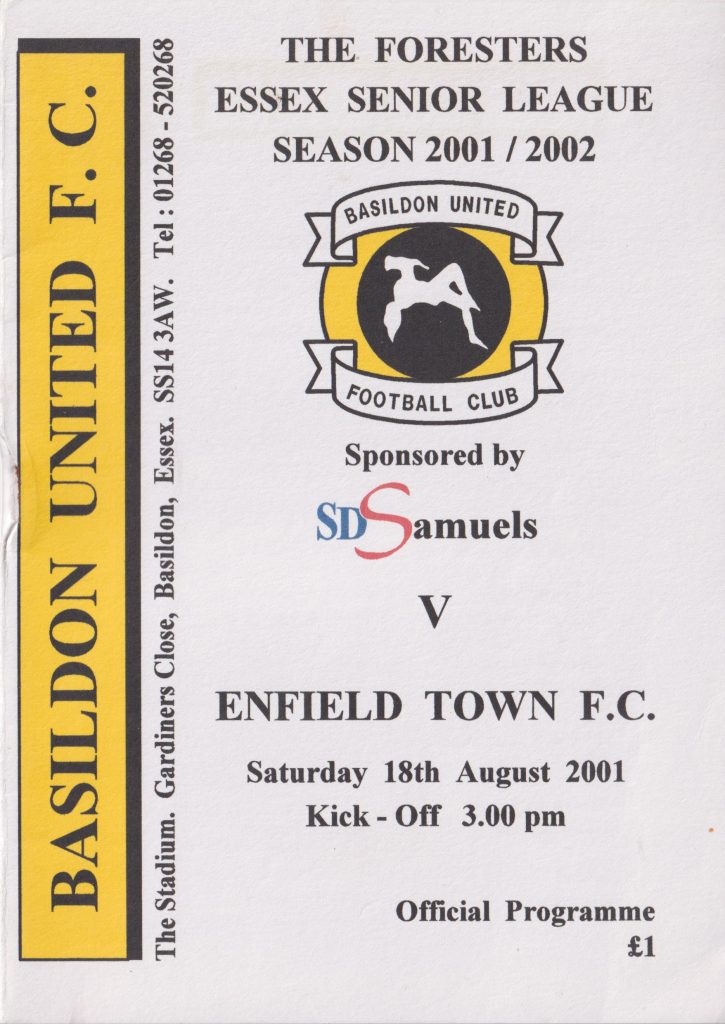 It was 20 years ago today may be a phrase made famous by Sgt Pepper but today, June 23, is a milestone in the history of our club – 20 years since we were formed as Enfield Town FC, writes Andrew Warshaw.

It’s been an interesting journey to say the least, with several  bumps and bruises along the way.

Some of you will remember us being allowed entry into Essex Senior League all those years ago (see attached programme cover of our first ever league game). Others among you were not even born.

There were times when many wondered how long it would take to create our own identity. But now not only do we have a stadium to be proud of in the heart of Enfield but, as the country’s first supporter-owned club, we have carved out a template that has not only been copied by a string of other clubs but has brought us plaudits from across non-league football – and not just in the UK.

It isn’t every day that a grass-roots non-league football club discovers a whole new fan base – especially one hundreds of miles away overseas.

We are now, would you believe, being avidly supported by a Spanish website whose readers have taken The Towners to their collective hearts as a result of our fan ownership ethos.

Every month, Aficion Deportiva, founded two years by a group of student journalists and read by over 40,000 fans across Spain, features articles on our progress.

Pablo Triguero, who co-ordinates the website’s amateur football coverage, explained: “When I was a child, I was a big fan of the Premier League and its star players.”

“But in recent years a lot of things have changed, not least clubs’ relationship with the fans. That’s when I started to look into the whole concept of fan ownership and discovered Enfield Town. “I love the way the club is focussed on the community.”

He’s not the only one. Many fans have become disillusioned with the money-driven world of the professional game, fuelled by the widely condemned concept of the European Super League.

It’s another reason why our 20th birthday is such a special occasion and we will be celebrating it in fitting style just as soon as the government’s Covid guidelines become clearer, not least as a thank you to all those who have contributed so generously to the ongoing crowd-funding appeal. Watch this space on that!

Our chairman Paul Reed, who has worked tirelessly to get us to where we are now, summed up what the anniversary means.

“The last 20 years have been an amazing journey for us all at Enfield Town FC – from starting off very much as a protest of Enfield FC supporters determined to have a team to support back in our borough through to the ever-growing club we see today,” said Paul.

“The fact that we are here today as a strong and progressive club is tribute to the many hundreds of people who have volunteered their time, resources and money to support us through our growth both on and off the pitch. There are far too many to thank but they all know who they are and I hope they all feel that have a club that they can call their own and be very proud of.”

“Personally I feel very privileged to have been part of this journey but know that myself and my fellow board members are only temporary custodians and that we need to continue to build the club on firm foundations so that it can keep growing and thriving for many decades to come.”

“Being the first fan-owned club in the UK is something we are all immensely proud off and are thrilled to have led the way for many fantastic clubs who have followed in our footsteps. It’s great that fan ownership is still firmly on the football agenda in 2021 and hopefully we’ll see a big increase in supporter-led clubs in the years to come.”

No-one goes back further when it comes to remembering the trials and tribulations of the local football scene back in the day than fellow board director Les Gold, one of the most familiar faces in and around QE11 who has done as much as anyone to put us on the map.

Les, now 80, has all kinds of memorabilia from on and around the  time the club was formed in 2001 which, he says, he cherishes as much today as ever.

“Getting our own home after playing at Brimsdown  and everything else that happened was wonderful,” Les recalls. “The Council were very good to us. A lot of people still associate us with the old Enfield FC but the way I see it, Enfield FC represent memories whereas Enfield Town is our history.”

“Even in the lower leagues, we always had a strong following. If visiting teams won at our place, they reacted as if they’d won the World Cup.”

“Has it been a struggle at times financially? Of course but I’m so proud of the professional way the club is run. They are a huge part of me in my 80s. I find it very therapeutic.”

As part of our anniversary celebrations, Tottenham Hotspur have kindly agreed to donate a signed shirt and ball for us to auction on the evening of the eagerly awaited pre-season fixture against their under-23 team on July 20. The plan is for a prominent Spurs figure to be  present to award the auctioned items to the successful bidder on the night.

There will, of course, be other activities  to mark our 20th birthday of which more later. In the meantime, we eagerly look forward to our members’ meeting on July 8.