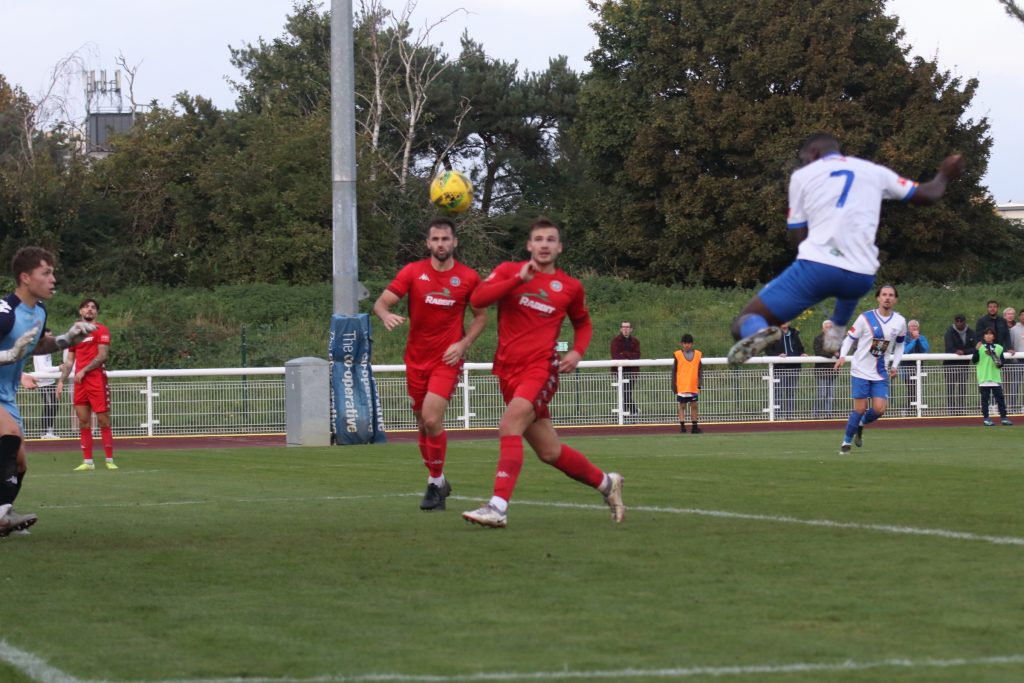 Enfield Town twice came from behind and remained top of the league as the eagerly anticipated showdown between the division’s top two ended all square on Saturday.

We may have relinquished our 100 percent  home league record but we are unlikely to meet many better sides this season than Adam Hinshelwood’s Rebels who played the slicker football, especially in the first half, but ultimately could not turn it into all three points.

You have to give enormous credit to Town who showed commendable tenacity, determination and spirit as they maintained their one-point lead over Worthing – who have a game in hand – as well their unbeaten home run.

Praise also has to go to the management team who changed the system to get back in the game at a time when we were in danger of being over-run.

Mo Faal thought he had opened the score straight from the kickoff, only to have his neat finish ruled out for offside. For the next 35 minutes, Worthing took control , playing out from the back and moving smoothly through the gears.

Nathan McDonald had already saved magnificently from Oliver Pearce when, after 16 minutes, it was no surprise when the visitors struck first. It looked as if Lee Chappell had been fouled but nothing was given and Jasper Pattenden ran on to place his low shot in the corner.

With Worthing’s composed play, especially in the wide areas, causing us all kinds of problems, we switched to 3-5-2 – something that had been discussed in the build-up to the game – and it soon paid dividends. On the stroke of halftime, Faal’s skill and persistence down the right caught Worthing napping and from his pinpoint cross, Percy Kiangebeni headed a superb equalizer.

It was the perfect tonic we needed yet 13 minutes after the restart, the Rebels were back in front, Rees Myles-Meekums heading home after we took our eye off the ball when the referee played advantage following a foul on the edge of the Enfield box.

Andy Leese was furious with the defending and had to be restrained in the dug-out by Mario. To make matters worse, by now Scott Thomas had been lost to what looked like a hamstring injury to go with his persistent ankle problem, Sam Youngs taking his place.

But on 69 minutes we levelled again as the ever-threatening Faal latched on to substitute Adam Cunnington’s flick, kept his composure and finished with trademark aplomb.

Both teams had chances to win it in the final stages, Mo for the Town despite having five defenders around him and, for Worthing, substitute Darnell Goather-Braithwaite who held his head in the hands after planting a free header over the bar from close range with virtually the last kick of normal time.

Andy Leese was happy with a point against most pundits’ tip for automatic promotion.

“We struggled for the first half-hour, then changed our shape to match them up,” said Andy. “We warned them at halftime about concentration so I was really unhappy about Worthing’s second goal. But our resilience was there for everyone to see. The key is not to lose to the sides around you.”