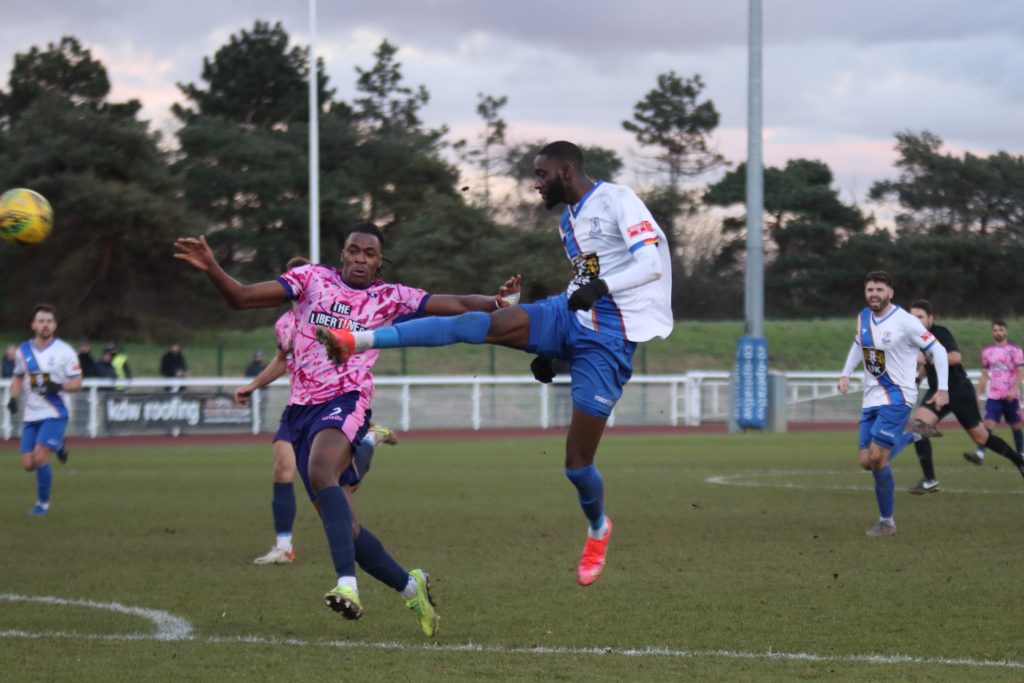 Enfield Town moved to within two points of leaders Worthing after an almost complete performance saw them beat play-off contenders Margate by four clear goals. With Worthing, Lewes and Bishops Stortford all dropping points, this was almost a perfect afternoon for the Town, with the majority of the 625 crowd thoroughly enjoying themselves.

Town recalled Jerry Gyebi to the back line with Nathan Smith moving to left back. New signings Kraig Noel-McLeod and Alex Solomon were both on the subs’ bench.

The game was played in a stiff end-to-end breeze, with both teams attempting to make use of it with a plentiful supply of crosses. Lyle Della-Verde’s dead ball kicks and Lee Chappell’s long throw-ins were causing visiting keeper Billy Johnson no end of problems, while the visitors’ Ben Greenhalgh was firing the ball in from all angles at the other end, but with limited end product. It was from a Chappell throw that Town struck the first blow on 37 minutes, Mo Faal smashing in a loose ball from a flick-on.

After the break, Town doubled their lead after Margate goalie Billy Johnson missed his kick on the edge of the box, leaving Jake Cass to finish into the empty net. After that, the home side took over completely. Sam Youngs’ long-range header ended up on the roof of the net, and Johnson somehow juggled a corner against his own post, before saving Youngs’ follow-up. After 65 minutes, Town made the game safe when Cass flicked on Nathan McDonald’s long kick into the path of Faal, who finished expertly to Johnson’s left.

Faal then hit the crossbar after 79 minutes, Adam Cunnington’s follow-up effort being cleared off the line. Town’s top scorer then completed his hat-trick in injury time with a well-taken penalty following a trip on Della Verde. The celebrations were long and raucous at the final whistle. Just how far can this Town team go?