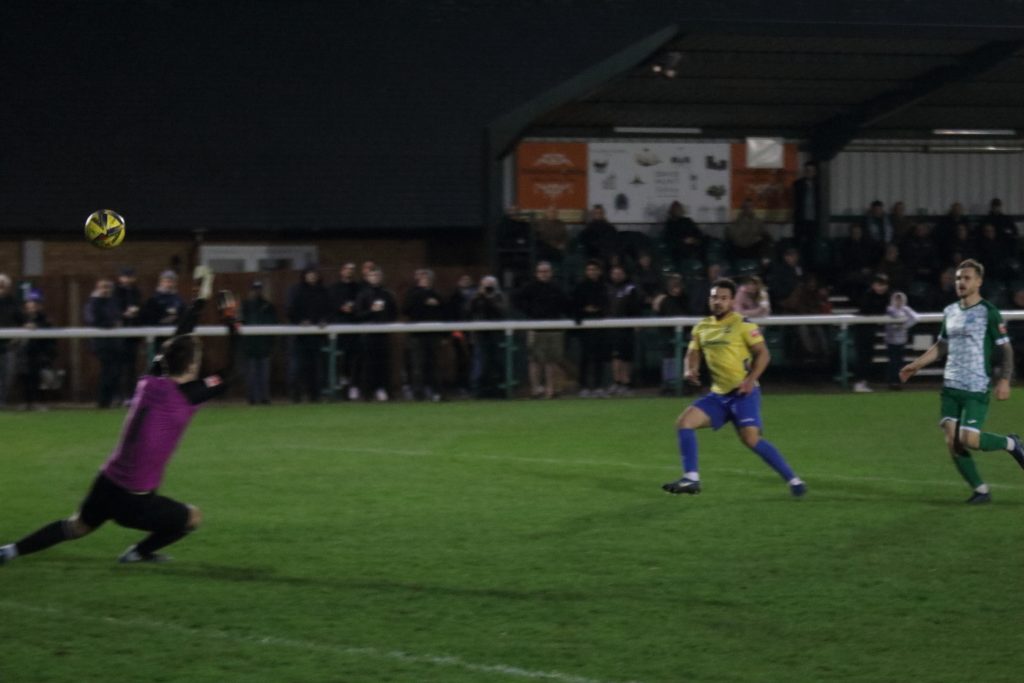 A brace from Lyle Della-Verde sent us into the second round proper of the FA Trophy for the first time in the competition’s current guise.

Whilst it was never easy against determined fellow Step 3 opponents, no-one could argue that we thoroughly deserved our place in Monday’s eagerly awaited draw when National League north and south teams join the tournament.

In terms of chances, we dominated proceedings, in fact Nathan McDonald didn’t have a single save to make. But cup games can quickly turn against you and there was a palpable sense of relief when the full-time whistle went to the delight of a fantastic away following in the 397 crowd.

With Adam Cunnington ruled out through illness just before kickoff, the management team called up Matt Walsh but there was no time for him to make the journey up the A1 to join the subs bench.  Thankfully, it didn’t affect the result.

The first big chance of the game went the hosts’ way as Ronan Silva drove an effort inches past the post with McDonald beaten.

But two minutes later, Mo Faal thought he had opened the scoring for Town, finishing off a gorgeous move only to be ruled offside – wrongly according to almost everyone close to the action except the linesman.

Mo was a threat all afternoon but this was one occasion when time after time he fell foul of the offside flag.

By the midway point of the first half, we had moved into the ascendancy and it was no surprise when we went in front on 22 minutes. Biggleswade failed to clear a corner and Della-Verde hit a sweetly struck shot through a ruck of players and into the net.

He should have made it two moments later, heading over from four yards when unmarked after great combination play down our left.

Nathan had been largely untroubled since that early Biggleswade chance but calamity struck five minutes before the break. Helping out his defence, Lewis Taafe got the last touch from a corner (even though the goal was credited to Biggleswade defender Matt Hall) and the ball trickled over the line for the most fortuitous of equalisers.

Encouraged by their goal against the run of play, the hosts enjoyed a strong 10-minute spell at the start of the second period but we were soon back in control – creating chance after chance.

Della-Verde fired into the side netting from close range, then twice in quick succession rushed his shot and blasted over the bar. Then  it was Mo’s turn, pulling the trigger from 30 yards only for Jake Alley to make a flying save.

Lyle wasn’t to be denied, however. On 70 minutes with the home defence backing off, he kept his composure with an unstoppable effort to restore our lead.

Cue a double substitution one of which gave young Luke Cook his first taste of first-team action.

Whilst we always looked capable of getting a third – not least when Mo was clean through but uncharacteristically took the wrong option — Biggleswade were still in the game. On more than one occasion we were forced to throw bodies in the way of home-team efforts, with Harold Joseph enjoying an especially eye-catching afternoon.

Late on, we switched to a back five to see the game out and all in all, another commendable team display despite being without a number of players. Now we wait to see who we pull out of the hat on Monday.