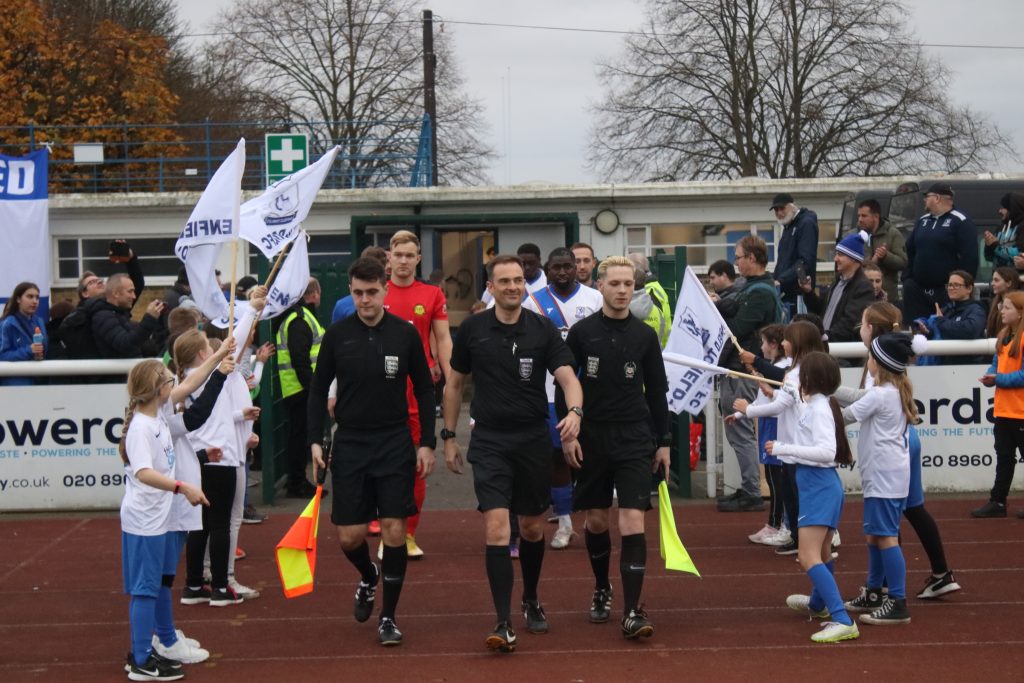 What an afternoon – on and off the pitch.

In front of a bumper 600-plus crowd to mark the 10th anniversary since we moved into QE, the players did us proud with a stirring second-half fightback while it was an unforgettable day all round, featuring a huge pre-match photoshoot involving all our teams followed by our youngsters taking over the match-day activities.

Not only did we maintain our unbeaten home league record to stay second in the league but also closed the gap on leaders Worthing, turning on the style in the after the break to make up for the last-gasp midweek defeat at Bishops Stortford.

Sam Youngs was back from vacation but new signing Kurtis Cumberbatch got the nod in midfield in an otherwise unchanged side.

It didn’t start too well as Merstham’s Korrey Henry netted from the penalty spot after 11 minutes, awarded after Ryan Kirwan barged over Chace Jacquart.

In truth the visitors looked the more composed outfit early doors but we soon started to test them, with Andre Coker narrowly off target and Mo Faal seeing his shot saved  by legs of Toby Bull.

Mo had a quiet first half by his own high standards with James Richmond gobbling up almost everything at the back for the Moatsiders. In fact we found it hard to find the spaces in what was a generally unspectacular opening period

Cue the second half, cue a totally dominant performance as we came out with all guns blazing to turn the game around with Nathan McDonald a virtual spectator in goal.

Special mention has to go to Percy Kiangebeni who put in what can only be described as the complete box-to-box midfield display from first minute to last.

We were rewarded on 58 minutes when another penalty  was awarded, albeit somewhat dubiously, when Percy was adjudged to have been fouled just inside the touchline after a trademark driving run into the danger zone. Mo did the rest from the spot to level.

Chance after Towners chance then went begging until, on 70 minutes, Toby Bull pushed Percy’s fierce drive into the path of Mo, who drove home the rebound for his and our second.

Now it was question of making the game safe and Coker should have done just that, only to screw his shot wide with the goal at his mercy.

In the dying moments, however, he atoned for his glaring miss as he made the points safe with a neat finish after being put through by Mo who showed great persistence  in taking advantage of a bad mistake in the visitors’ defence.

The scenes of jubilation at the final whistle among both players and supporters rounded off a wonderful family-friendly afternoon.

The games come thick and fast. Hornchurch next on Tuesday which should be a spicy affair and then the FA Trophy 2nd round on Saturday at Hanwell.