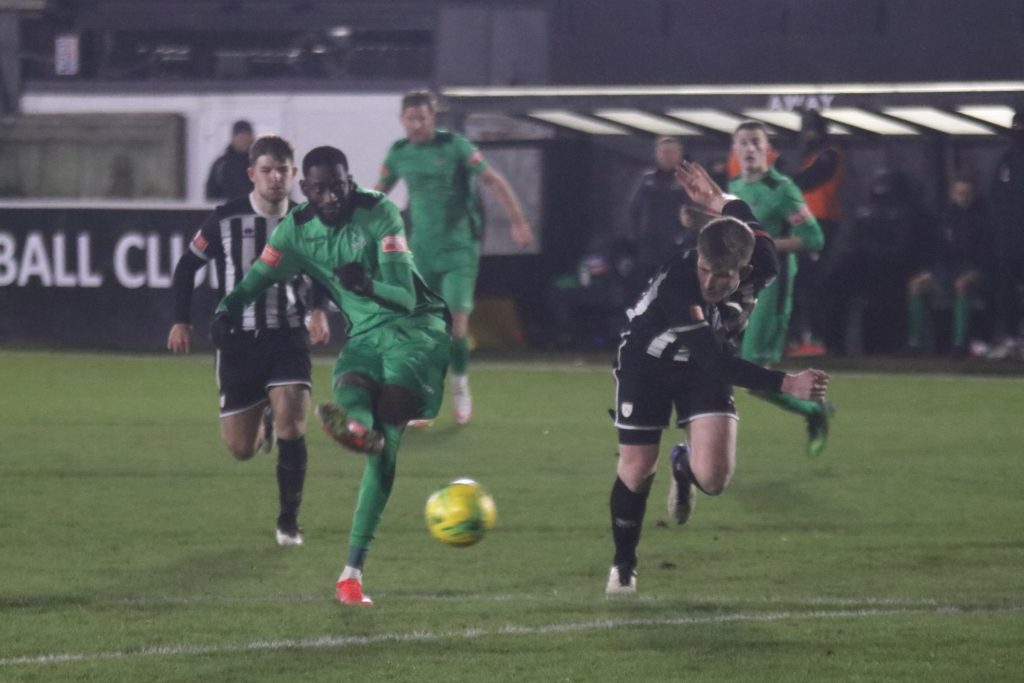 A brace from Mo Faal sent us into the third round of the FA Trophy on Saturday on an afternoon when controlled football was rendered extremely difficult by the blustery conditions.

Having said that, the pitch was a credit to our Step 4 opponents who in the first half gave as good as they got despite the absence of three cup-tied players but didn’t pose much of a threat after the break as our superior composure and game management won the day.

With Manny Maja back in the side following a one-match ban, it was a toss-up whether Sam Youngs would retain his place in the side after his winner again Hornchurch in midweek or whether the on-loan Kurtis Cumberbatch would be selected again.

Sam got the nod and went on to put in a man of the match performance that said everything about the team ethic and competition for places.

Just two minutes were on the clock when Mo had the ball in the net, only to be ruled narrowly and controversially offside.

Hanwell responded by carving out two glorious chances to take the lead, first when right wingback Dan Carr, their most effective player on the day, brought a superb save from Nathan McDonald, only for Ogo Obi to head the rebound against the bar when it was easier to score.

We had another let-off courtesy a bad mistake from  Jerry Gyebi whose underhit square pass let in Tom Siemienczuk who delayed his shot and allowed Nathan to smother.

That was effectively that as far as Hanwell’s threat was concerned as we began to take control.

Mo soon had the ball in the net again, only for the flag to be raised once more, this time with more justification.

But it was a case of third time lucky on 43 minutes as he beat the offside by running on to Lyle Della-Verde’s long ball and burying his shot in the corner.

Now it was a question of trying to make the game safe as we upped the ante and were quicker to the ball.

Andre Coker and Della-Verde both went close while Youngs continually wrested possession from the opposition to set up attacks and Harold Joseph put in another masterly performance at the back.

When they did have a chance to hurt us, Hanwell invariably rushed their efforts or chose the wrong option.

The second goal in a game of few clearcut chances finally came on 80 minutes, just after we had changed formation, and was noisily greeted by Town’s travelling following who made up the majority of the 336 crowd.

Substitute Adam Cunnington, who moments earlier was able to play on despite a nasty gash down his leg, fed Mo and the ball squirmed into the net via the Hanwell keeper’s fumble, making sure that we didn’t become their second Isthmian Premier League scalp

“It was a fantastic performance against a good Hanwell side,” said Andy Leese. “Conditions were difficult but we navigated them well and I felt we largely controlled the game and restricted them to few chances.”

“Mo showed his match-winning qualities again, scoring at good times for us to get ourselves in the next round. We had great travelling support again where thermals were the order of the day. We could hear the singing from inside the dressing room.”

Now we await the third-round draw at lunchtime Monday with the mouth-watering prospect of playing one of non league football’s big boys in what is our longest run in the tournament.