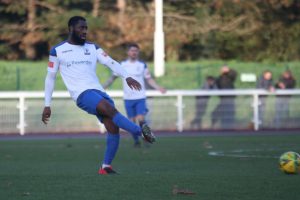 Harold rejoined the club in October 2020, making his competitive return in an FA Trophy tie against Ramsgate. In his initial spell at the QEII he made 80 competitive appearances, scoring 9 goals. His other former clubs include Barnet, Stevenage, Wingate & Finchley, Hayes & Yeading United, St Albans City and Royston Town.