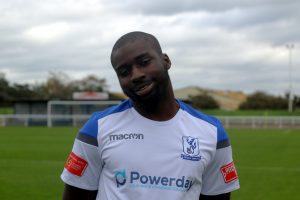 23 year-old Percy has returned to Town – he has featured as a trialist in a number of per-season friendlies – for a second spell at the club, having made 33 appearances (one goal) under Bradley Quinton. His positional versatility and commitment made him a popular figure with supporters during his initial spell in a white shirt, and he subsequently represented Concord Rangers, St Albans City, Hendon and Hertford Town.