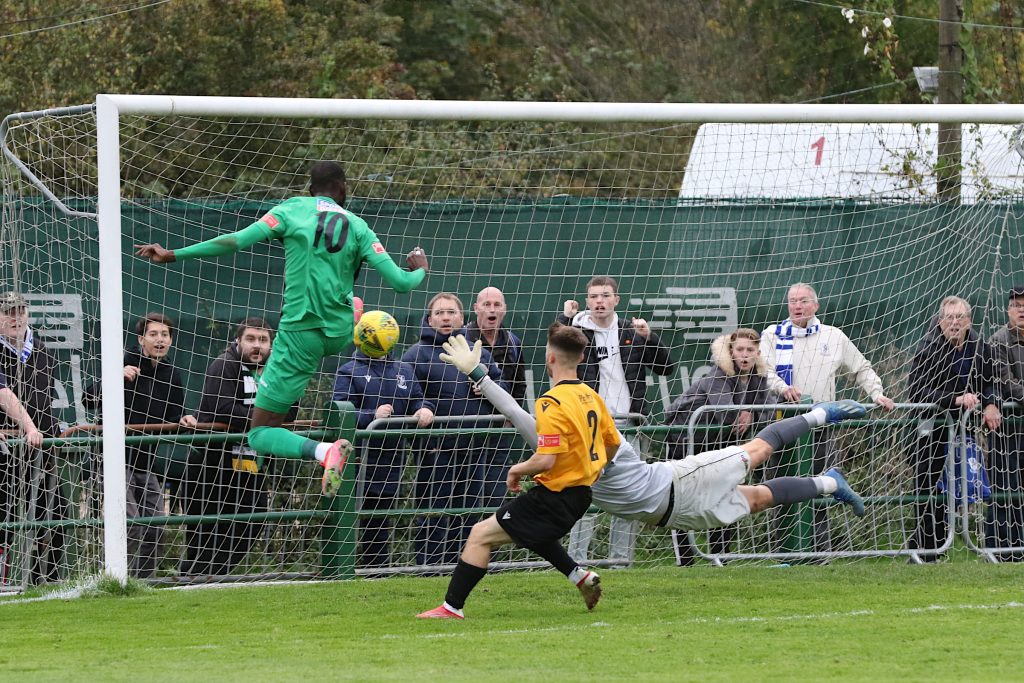 Memorable, unforgettable, one of those “I was there” occasions.

History was made on Saturday when we recorded our biggest ever league win by annihilating East Thurrock – a team we had never previously beaten home or away. Talk about ending the jinx in style!

Despite skipper Scott Thomas missing out through injury and Andre Coker only well enough to make the bench, we had heroes all over the pitch as our teamwork and togetherness blew away our shell-shocked opponents with a whirlwind of a first half that saw us lead 7-0 at the break, courtesy of lethal finishing.

Mo Faal was at his scintillating best, carrying off the match ball at the end having netted four times but it was hard to pick a man of the match as everyone played their part in a game that will live long in the memory.

Andy Leese and the management team will doubtless impress upon the team not to get carried away with a hugely challenging FA Trophy fixture against fellow Step 3 side Met Police – unbeaten on the road – next Saturday. But both players and staff deserve enormous credit as we maintained our position at the top of the league.

The game was six minutes old when Adam Cunnington, who arguably had his best game in a Towners shirt, winning virtually everything in the air and tracking back when necessary, netted a rebound after Mo’s overhead kick from Lee Chappell’s long throw came back off the bar.

Four minutes later Lyle Della-Verde, whose skill on the ball troubled the hosts all afternoon, scored in the corner direct from a freekick with the Rocks defence asleep.

On an afternoon when the quick thinking and understanding between our players was almost telepathic, Mo ran on to Cunnington’s flick for number three and was soon in the right place at the right time to convert Della-Verde’s corner.

The nearest East Thurrock came was when Danny Cossington hit the woodwork but on 26 minutes, it was 5-0 as Percy Kiangebeni’s shot was only half cleared and Della-Verde drilled his shot low and hard beyond the keeper.

As the home fans lambasted their team for embarrassing, woeful defending, the goal spree continued as Mo completed his hattrick, winning and converting a 33rd-minute penalty after the referee adjudged he was tripped.

There was still time in an exhilarating first half for Nathan Smith to get on the scoreline, latching on to a Sam Youngs freekick after ghosting in unmarked at the far post.

With the game won, Andy Leese made an immediate and sensible change at the break as Jonathan Muleba replaced Manny Maja, who had been booked in the first half and couldn’t risk a second yellow.

As a result, Chappell moved seamlessly into central midfield alongside Percy and Sam Youngs, the latter deserving considerable praise for an outstanding energetic display capped by a terrific strike that crashed against the bar.

A minute later Mo was on hand to finish off another glorious Della-Verde cross to pick up his fourth goal for 8-0, only to be understandably subbed shortly afterwards, his work very much done for the day.

It could so easily have been nine when Della-Verde, going for his hattrick, saw a second penalty awarded to Town well saved by Arthur Janata. And there was still time for substitute Lewis Taaffe to blast over after a fabulous exchange down the left with the ever-improving Ryan Kirwan who put in another eye-catching faultless performance.

As an exhibition of clinical finishing, we may never see the like of it again but next up Met Police and a chance to progress in the FA Trophy, with no room for complacency.