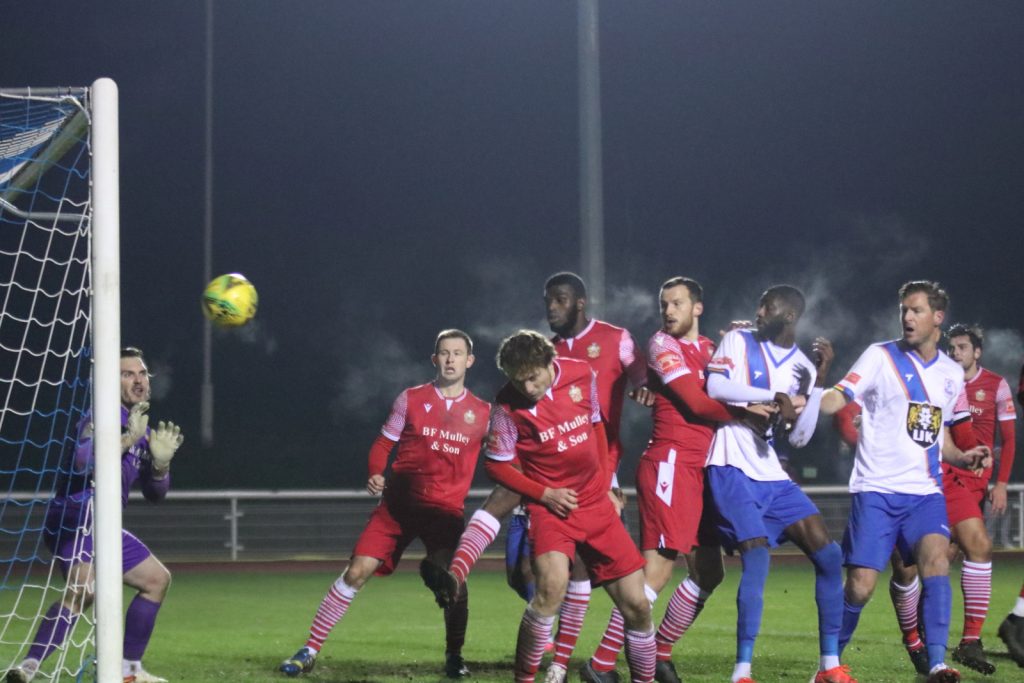 There’s an old saying in football that successful teams pick up crucial wins when not at their best.

That was epitomised on Tuesday night when we edged out Hornchurch in an often spicy affair to cement second place and climb to within two points of  Worthing at the top of the table.

For periods of the game, especially the first 20 minutes of the second half, the visitors – FA Trophy winners just six months ago — looked the more skillful side, particularly in midfield, and will no doubt feel hard done by.

But once again our never-say-die spirit, self-belief and character shone through, allied to canny tactics from the management team.  Nathan McDonald once again hardly had a save to make with most of Hornchurch’s efforts wide of the mark though in truth they did hit the woodwork twice.

Former Towner Joe Wright was definitely the busier keeper on the night,  however, starting in the very first minute when he clawed away a bouncing shot from Curtis Kumberbatch.

Hornchurch came within a whisker of taking the lead when Chidubem Onokwai rifled a 30-yard piledriver against the bar.

But on 17 minutes we were in front from the penalty spot. Ollie Muldoon wrestled Percy Kiangebeni to the ground at a corner and the referee had no doubt. Wright has a reputation as a great penalty saver but not this time as Mo Faal sent him the wrong way.

It was very nearly 1-1 when Onokwai’s turn and shot was narrowly off target but we went in a goal to the good at the interval.

We hardly had had time to catch our breath than Hornchurch caught us cold at the start of the second half, a delicious cross from Jili Buyabu taking out the entire defence for Onokwai to supply the finish.

On the hour mark, Liam Nash saw his shot come back off a post into the grateful arms of Nathan but we were giving as good as we got, if not more so, with Ryan Kirwan and, twice, Mo going close to restoring our lead. We even had the ball in the net again, only for the referee to spot an infringement no-one else seemed to have noticed.

Such is the rivalry between the sides that two mass brawls had to be broken up while the bookings came thick and fast — four for Town and three for Hornchurch — though former Towner Mickey Parcell  was lucky not to be shown a straight red for a reckless challenge on Kirwan.

As the game moved into the final quarter, the management team made a double substitution, switched formation  and it had the desired effect. On 82 minutes, Andre Coker swung in a corner and Sam Youngs ghosted in Martin Peters-like at the near post with a superb match-winning header.

And it would have been 3-1 but for another smart save from Wright who thwarted a 3-v-1 move in stoppage time.

“Another resilient performance from us, especially in the second half,” said Andy Leese. “They are a difficult team to play against and we rode our luck on a couple of occasions.”

“We responded by changing our shape and it gave us the edge.  We have that adaptability this year to make changes in a game that can really alter how we play.  I’m pleased for Sam to score the winner. Now we focus on the FA Trophy game at Hanwell on Saturday, another test to see far we can go in a competition we really enjoy.”