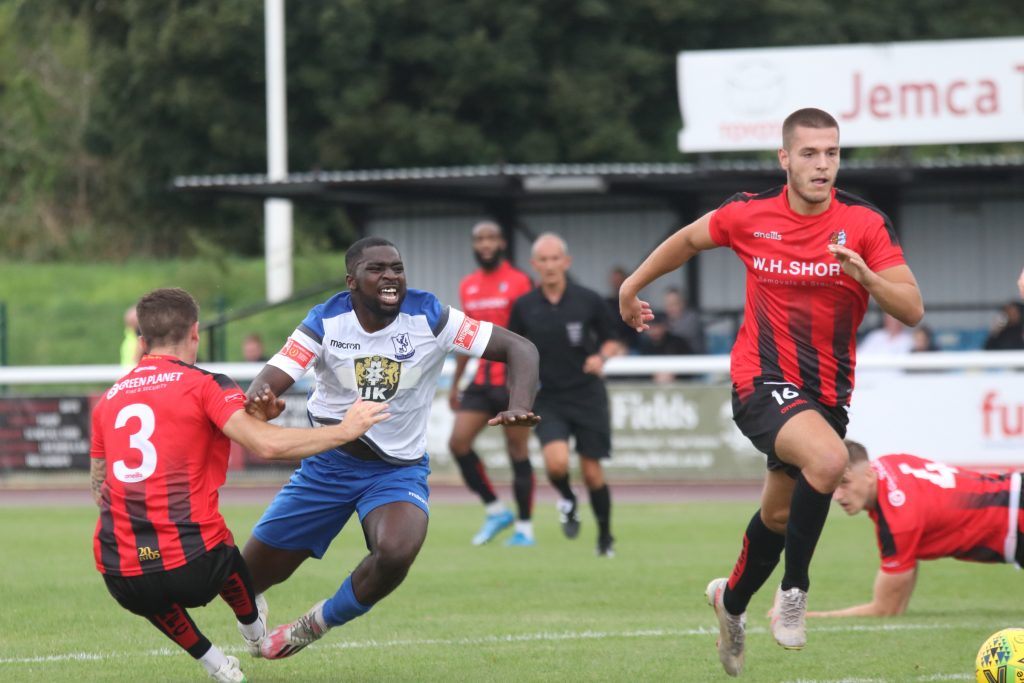 We are only two games in and it’s early days. But momentum means everything and our 2-0 win over Brightlingsea Regent on Saturday  put us top of the division on goal difference and augurs well as we head into a busy Bank Holiday weekend.

With Andy Leese away on other business, Mario and Ian Hart took charge of the team on the day and the players didn’t disappoint.

Our visitors started brightly, if you’ll excuse the pun, but the confidence from our opening-day win at Carshalton soon  shone through and we ran out worthy winners. In fact we would have won by more but for some excellent second-half goalkeeping from Regent’s Charlie Turner.

The best early chance fell to Brightlingsea when Jake Clowsley’s angled drive was pushed away for a corner by Nathan McDonald. In fact the first 15 minutes were even but we soon got into our stride despite two handball appeals by the visitors, both of which were waved away.

Mo Faal twice stung the hands of Turner before Rian Bray, up for a freekick after Mo was foul, was narrowly off target.  Another freekick, awarded  after Percy Kiangebeni was brought down after a mazy run, saw Andre Coker shoot over.

Just like at Carshalton, Percy (pictured) was arguably our most influential player on the day and it was his goal that put us in front with halftime approaching, albeit with considerable help from the otherwise superb Turner.  More excellent link-up play between Percy and Andre Coker ended with the former’s shot squirming into the net following an unfortunate fumble by Turner much to the delight of the Towners’ faithful behind the goal.

Just like in the first half, the visitors began positively after the break and should have levelled when Ken Feyi was off target with a free header.

But when he went off injured, his team’s main attacking threat went with him.

By then, however, Town would have been out of sight but for a series of tremendous saves by the quick-thinking Turner.

First he somehow kept out  Josh Urquhart’s powerful volley,  then made two flying stops from the ever-dangerous Faal who on another day might well have had a hattrick.  Another reflex save, this time keeping out Kiangebeni’s low shot that was heading for the corner, kept his team in the game.

Only in a tense final few minutes were we forced on the back foot as Brightlingsea  chanced their luck. But we deservedly held our nerve  and in stoppage time substitute Ebrima Sawaneh, with virtually his first touch, made the game safe as his half-hit, bouncing shot nestled  in the corner after fine work by another sub, Sam Youngs.

Altogether a thoroughly pleasing display as we head into two eagerly awaited fixtures,  at in-form Folkestone on Saturday and the Bank Holiday Monday derby at home to Cheshunt.