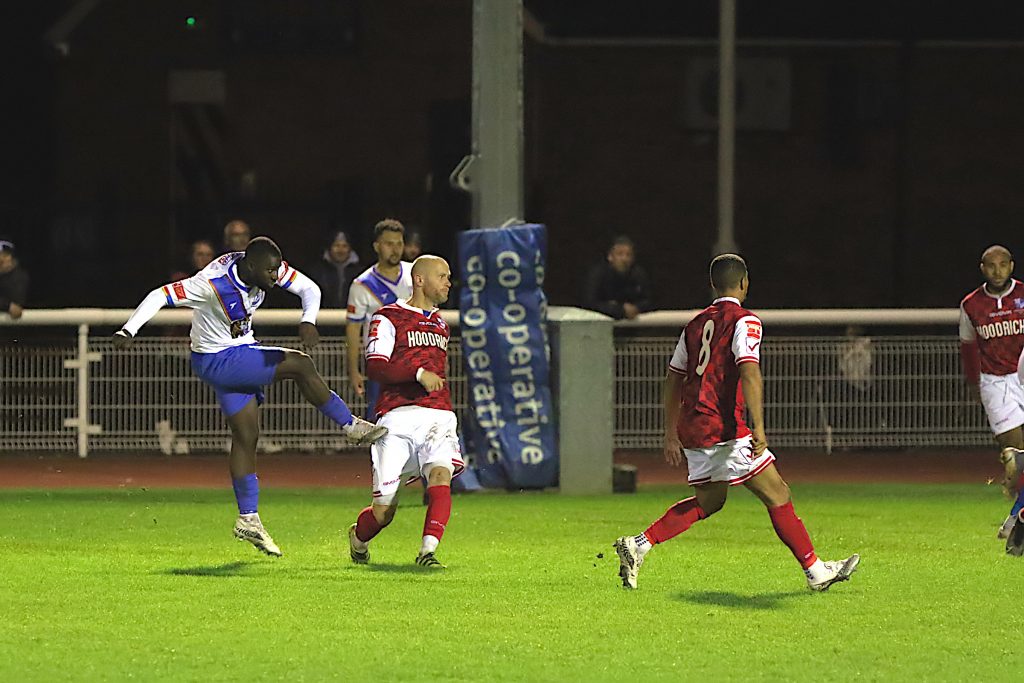 Five home league games, five victories. And this one was especially sweet, sending us to the top of the league for the first time ever at this stage of the season at Step 3 and sparking huge celebrations in the dressing room and among the fans.

This report was published before Worthing’s visit to Kingstonian but whatever the result there in terms of how the table stands, Saturday’s game against the Rebels, the Mackeral Men – call them what you will – promises to be a mouthwatering occasion, not least since our visitors were justifiably most people’s tip for automatic promotion before the start of the season.

Maintaining our 100 percent home league record against Wingate and Finchley in the latest of our local derbies was always going to be a challenge, with former Towners skipper Marc Weatherstone now in charge of the opposition and three of our ex-players in the visitors’ squad.

Andy Leese chose an unchanged team from Leatherhead and we were quickly on the front foot with Lyle Della-Verde, seemingly back to full fitness, probing down the right and bringing a magnificent save from Ben Goode after Andre Coker had started the move on the other flank by whipping in a dangerous cross.

Wingate were forced into an unfortunate early substitution and as we continued to probe, former Towner Sam Hatton was cautioned for a foul on Manny Maja, much to the enjoyment of the home fans. From Della-Verde’s resulting freekick, Jerry Gyebi headed over with the keeper already committed.

Wingate were always in the game, however, and we were fortunate that no-one was on hand to convert familiar face Bilal Sayoud’s dangerous freekick across the face of goal. We were also thankful for a superb tackle on the edge of the box by Ryan KJirwan to thwart another Wingate raid and to Nathan McDonald for pushing out a Sayoud effort.

But as halftime loomed, so we struck first. Nathan Smith’s header from a corner came back off the bar and he was in the right place to bundle it over the line.

It could easily have quickly two as Mo Faal latched on to  a poor clearance, only for Goode to produce another outstanding stop.

Sam Youngs replaced Scott Thomas at halftime as a precaution given Scott’s ankle problem but we soon doubled our lead.

There are moments in some games that will long live in the memory and five minutes after the break came the latest.

Percy Kiangebeni (pictured) picked up the ball halfway inside the Wingate and Finchley half, steadied himself and unleashed a ferocious drive that left Goode motionless and will surely be a contender for goal of the season. No wonder Percy was mobbed by his teammates as he wheeled away in delight.

We so nearly put the game to bed when a bullet header by Faal from Kirwan’s pinpoint cross was gratefully held by Goode but on 69 minutes. the visitors were back in it.

A freekick on the edge of our box was whipped in by Biloul and when we failed to clear the danger,  Alphonso Kennedy’s sweet turn and shot beat McDonald in the corner.

Soon after the restart, we had two golden chances to make it three: first when the ball was somehow cleared off the W and F line and the follow-up from Della-Verde struck the post, then when Mo fluffed his shot after a glorious pass from the ever-improving Coker.

It made for a nervous finish (how many times have we said that?) during which W and F chanced their arm and McDonald was ludicrously booked for time wasting during six minutes of added time.

Next up Worthing, a six-pointer that is huge in itself but which we are using to highlight hate crime awareness week.