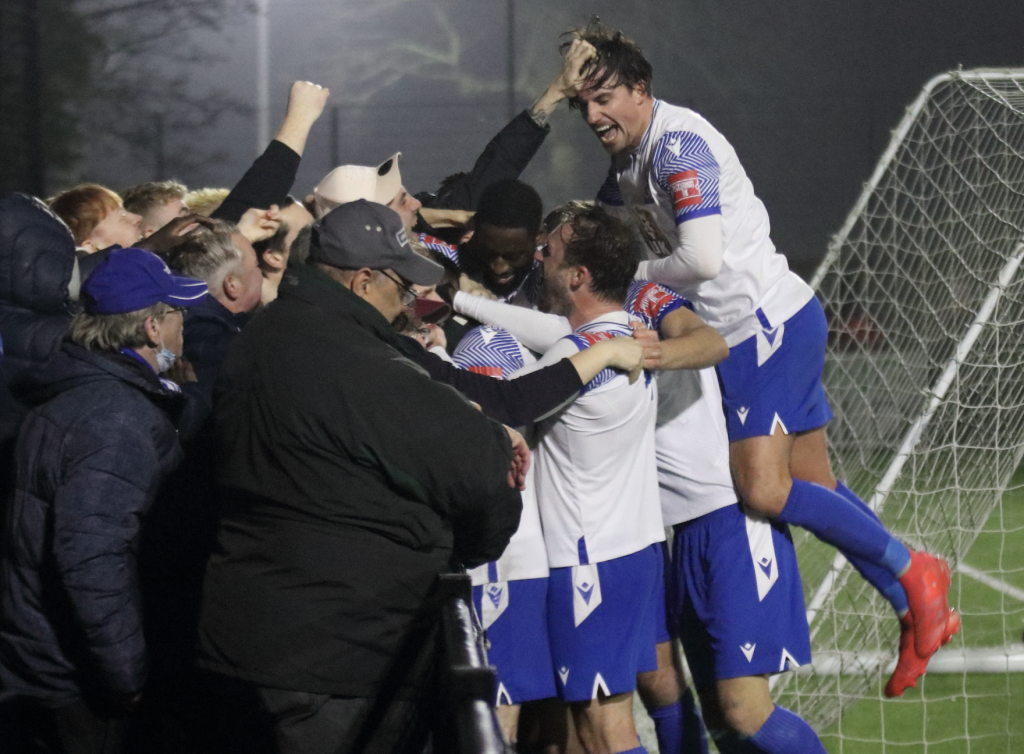 Another top-turvy goal fest but this time Town emerged victorious, cementing our role as the division’s great entertainers and pushing us up to fourth in the table.

On a drizzly night in West Sussex, we once again wobbled at the back but such is our offensive strength that we ran out deserved winners, helped by some canny tactical moves by the management team.

Ali Nichols, on loan at Colney Heath under dual registration, was handed his first league start of the season at rightback and, after an understandably nervy first few minutes, performed extremely promisingly whilst our new striker Jake Cass (pictured) was thrown straight in alongside Mo Faal – and even got on the scoresheet.

In front of a crowd of 502 – including a vociferous throng of Towners fans who kept up a constant din – it could have started disastrously for us.

But having given away a third-minute penalty, Nathan McDonald redeemed himself with a superb save from Eddie Dsane’s spotkick.

It wasn’t long before the goal spree started. Sam Youngs, who put in an assured and tireless box-to-box shift all evening, opened the scoring after being put through by Mo having already been denied by a reflex save.

But within 60 seconds before we  could celebrate, the lead was wiped out when Lee Harding took advantage of hesitancy on our left side.

McDonald’s finger-tip save from Shamir Fenelon kept us in it, only for Fenelon to put the hosts in front. Back we came through Lyle Della-Verde before the goal of the game seven minutes later.

Mo received the ball near the touch line and carried it 20 yards before unleashing a wonder strike beyond Sam Howes for his 22nd league goal of the season and one of his best.

The only downside of the first half was a nasty looking injury to Harold Joseph who came off worse in a 50-50 challenge and after lengthy treatment had to be substituted.

Another stoppage saw Nathan Smith, Harold’s replacement, luckily get to his feet after going for the same ball as Charlie Hester-Cook who had to be carried off.

Horsham thought they had levelled when the dangerous Fenelon fired into the side netting but parity was restored on 64 minutes when, slightly against the run of play, Dsane wasn’t picked up at the far post from a corner and atoned for his spot-kick failure.

Horsham then had arguably their best spell but as we switched formation, so we went for the winner and duly got it courtesy of Jake’s close-range finish following fantastic link-up play with Mo which can only augur well.

The pair of them were mobbed by the travelling faithful such was the importance of the goal that proved pivotal despite a mighty scare at the other end in the final action of the game.

Andy Leese was naturally delighted with the result, which came after one win in six but somehow seemed especially sweet with no-one else playing on the night.

“We opted to bring Eli back from his spell at Colney Heath and of course Jake making his debut. Both did very well and Jake got his reward for a very hard-working performance,” said Andy.

“Horsham are a well-drilled side and we had to adapt our shape a couple times to counter them.  We do that well and the final change brought about the winning goal. It;s all about picking up points this month however they come.”

“The only downside on the night was the injury to Harold. He’s damaged his ribs and we wait to see the extent. A quick note on the support. A good number of you made the long journey and you lifted the team,  especially in the last part of the game which was appreciated as always.”