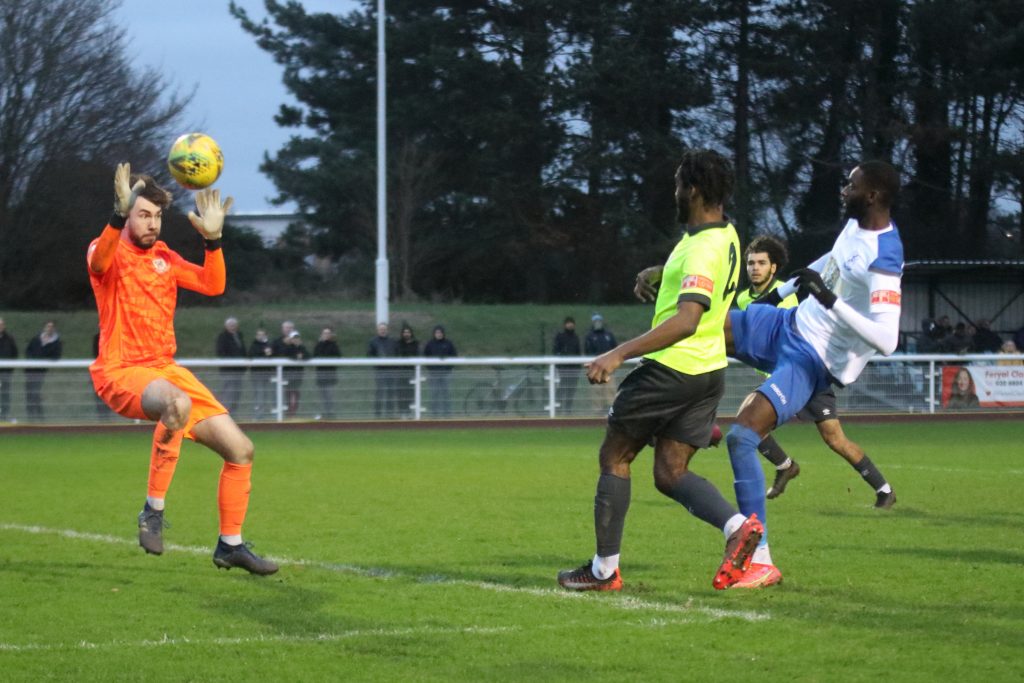 The perfect start to 2022. After a wobbly couple of weeks, Town moved back into the playoff positions with a second-half demolition of local rivals Potters Bar in front of a New Year’s Day attendance of 682 — largely courtesy of Mo Faal’s latest hat-trick.

Having taken just a point from our previous three games,  we started hesitantly and teenage reserve keeper Adi Connolly, in for Covid-hit Nathan McDonald, was forced into a superb early save.

Sam Youngs then produced a brilliant clearance off the line from a looping effort by Dwight Pascal as the Scholars, despite having to re-organise because of an enforced change just before kick-off, threatened again.

They were arguably the two best chances of the first half though Percy Kiangenbei  twice went close for the Town and both Mo — needlessly booked for handball — and Lyle Della-Verde also had opportunities.

At the other end, young Connolly was again called into action to save a curling effort by former Towner Bilal Sayoud who also produced a fierce drive  that whistled past the post.

Having already been forced into one change in their starting line-up, Bar were unlucky  to also lose key striker Joseph Boachie at the  interval and were blown away in a 15-minute spell at the start of the second period.

With the first move of the half, Mo capitalised on defensive hesitancy and lobbed Cieran Gordon-Stairn to give Town the lead.

Suddenly our confidence flooded back and Della Verde doubled the lead on 49 minutes picking up the ball in the left channel before drilling it home.

Between the two goals visiting manager Lee O’Leary received two yellow cards in quick succession for what appeared to be some choice words to the officials – and played no further part in the proceedings.

Right on the hour we made the game safe as Mo converted from the spot after a clear trip.

Bar now had arguably their best spell of the game as substitute Luke Joyce-Dwarika and Samson Eson both came close to cutting the deficit.

But they couldn’t stop Mo who saved the best till last, latching on to an 89th-minute cross from Andre Coker before committing the keeper, steadying himself and burying his shot in the corner to collect the match ball.

With only a 48-hour break before the next outing at Cray Wanderers on Monday, it was a hugely important three points – made sweeter by Folkestone and Cheshunt both losing.

Special mention has go to young Connolly who once or twice was charged down by the visiting forwards but kept us in the game at vital moments.

“We were a bit laboured in the first half but we played Lyle just behind the front two after the break and it worked an absolute treat,” said Andy Leese.

“We’ve stuttered in the last couple of games and conceded too many goals so we needed to get momentum back. I’m really pleased for young Adi who had to go in at 48 hours’ notice.”