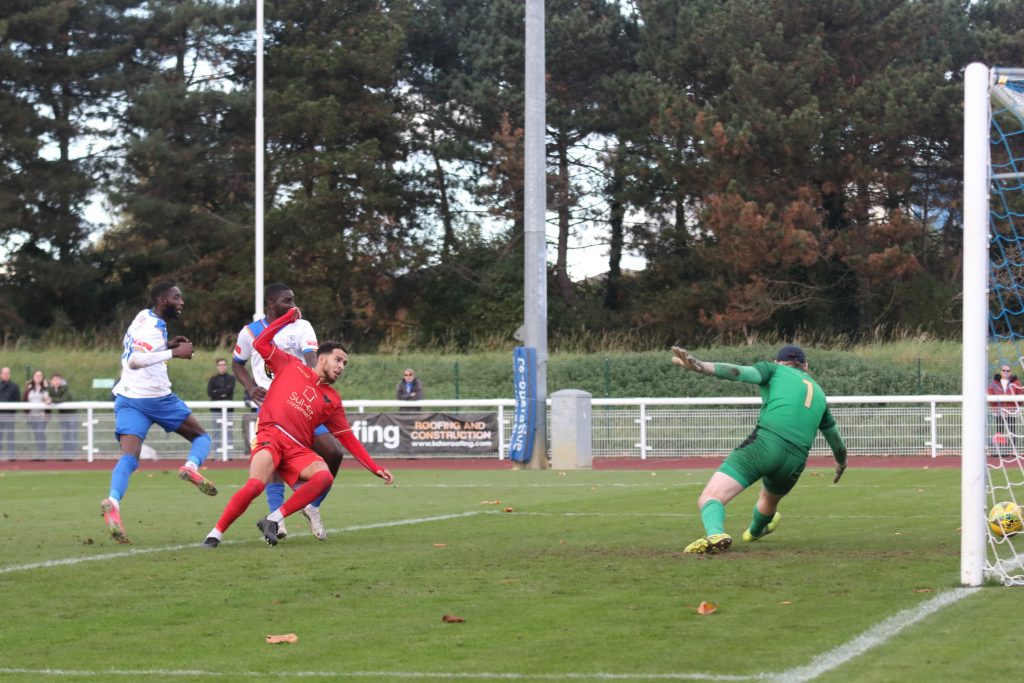 Everyone knew that our FA Trophy third qualifying round fixture would be a tough encounter and so it proved as we squeezed into the first round proper in the proverbial game of two halves – and two penalties!

Our visitors, also from Step 3, hadn’t been beaten on the road this season while we hadn’t lost at home.

Something had to give and thankfully it was us who maintained our unbeaten record as we moved through to Monday’s eagerly awaited draw.

With both Rian Bray and Nathan Smith unavailable through illness, the centre of our defence had an unfamiliar look with Harold Joseph getting a rare start alongside Jeremiah Gyebi.

This was never going to be another goal fest like at East Thurrock but we got off to an encouraging start, Lee Chappell’s header clipping the post and a snap shot by Mo Faal being cleared off the line.

After weathering the early storm, Met Police gradually came into the game and Nathan McDonald was forced into a timely stop from Luke Robertson.

But on 36 minutes, we deservedly went in front, Lyle Della-Verde’s floated freekick finding Mo via the head of Adam Cunnington.

Just before halftime it was so nearly 1-1 as Ollie Knight, Police’s most dangerous player, saw his shot come back off a post with McDonald beaten and Jonathan Hippolyte was flagged offside as he netted the rebound.

Second best for most of the opening 45 minutes, Met Police re-emerged a different team, bolstering their midfield, using the flanks to good effect and pushing us back. And right on the hour they levelled.

Rudy Allen’s accurate low drive was superbly palmed  away by McDonald but the resulting short corner took a looped deflection for Luke Robertson to head home.

The goal galvanised the visitors and as they stretched our back line, Ollie Robinson headed over. Yet just when Met Police were in the ascendancy, we were awarded a timely penalty on 81 minutes as Mo was adjudged to have been barged over.

Rather than take the kick himself he generously left it to substitute Andre Coker who confidently sent Liam Beach the wrong way.

The Met Police players, led by skipper Robinson, protested in numbers but soon afterwards and with the clock ticking towards full time, they were awarded a penalty of their own.

Percy Kiangebeni pulled down dangerman Knight on the edge of the box and up stepped Liam Ferdinand, only for McDonald to save brilliantly with his knees to the delight of the supporters behind the opposite goal.

Met Police will doubtless claim they deserved at least to take the game to spotkicks but not for the first time this season, we were rewarded for our hard work, togetherness and faultless spirit to take our place in Monday’s draw.