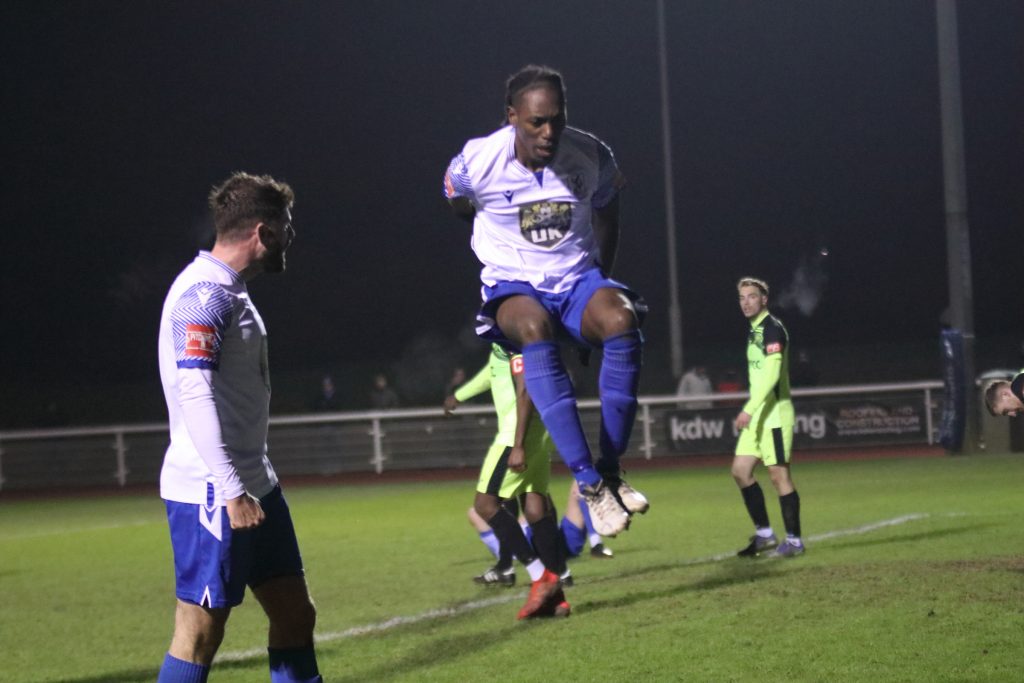 Two goals either side of half time saw Enfield Town bag a hard-earned victory over a hard-working Carshalton side who looked the better side for much of the first half. The win saw Town hang on to second place in the league on a night where Worthing, Lewes and Bishops Stortford all recorded wins to leave the top of the table looking largely unchanged.

The Town fielded an unchanged line-up from Saturday’s spectacular win over Kingstonian, but this was to turn out to be a vastly different sort of game. In fact, the opening half hour was a case of dustcart following Lord Mayor’s show, as Town struggled to put together any constructive moves, with a Sam Youngs header that was well saved by Brad House in the visitors’ goal being their only effort of note. Carshalton were buzzing purposefully around Nathan McDonald’s penalty area, and got their noses in front after 22 minutes, when a fortuitous rebound landed at the feet of winger Lewis White, who beat McDonald with a low shot to his right.

Slowly but surely, Town clawed their way back into the game. Both Jake Cass and Sam Youngs fired decent efforts over the bar before the equaliser arrived three minutes before half time, Nathan Smith bringing a bout of penalty area pinball to a satisfactory conclusion by striking a crisp half-volley into the net via House’s left-hand post.

After just two minutes of the second half, however, Town found themselves in front courtesy of the ever-reliable Mo Faal. His effort from the edge of the box was hardly hit with anything resembling venom, yet the ball somehow sneaked into the bottom corner, with House appearing to misjudge the direction of the shot. Five minutes later Faal beat House to a long through ball, only for his shot to be cleared off the line by Bradley Williams. Lyle Della-Verde picked up the loose ball and pinged a low cross back across the goal just out of the reach of Cass’ despairing lunge. Della-Verde and Cass both saw shots fly over as Town maintained the pressure, but the decisive third goal wouldn’t come.

The visitors’ late rally came to very little as Town defended well, and Faal even managed three further efforts in stoppage time, one just wide of the post, one well saved by House and one over the bar. This was a game in stark contrast to the win over Kingstonian, but Andy Leese’s side showed a pleasing resilience to bank three points in tougher circumstances.

“We could’ve taken the pressure off and made life a little bit easier for ourselves, but I thought we were the better side in the second half”, the manager noted.

“I think we’re showing that consistency. I’m absolutely delighted with us, nearly at the end of a really long month, to dig that out tonight was absolutely tremendous.”