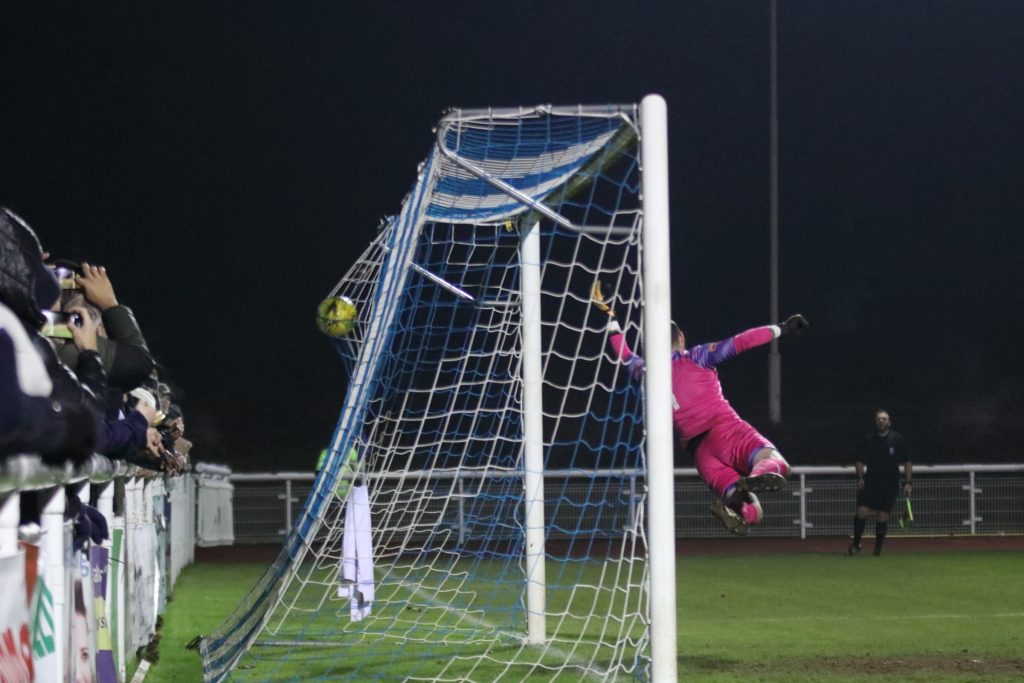 We may have now caught up and even overtaken some of our rivals in terms of numbers of games but it’s all about points on the board in this gruelling month of fixtures which continues on Saturday with a top-five showdown at Kingstonian.

Hence the importance of Tuesday’s win over a Bowers and Pitsea side who matched us for long periods but fortunately didn’t have our finishing skills.

With such a relentless programme, the management team rung a couple of changes but went with a strong attacking line-up and two wide players and it paid off as we moved up into second spot.

We were almost in front straight from the kick-off when Alexander Bentley was forced to head over his bar under pressure.

The lead came on 16 minutes courtesy of a quick one-two between Mo Faal and Adam Cunnington which Mo finished off with a neat toe-poke.

Shortly afterwards Cunnington squared for  Jake Cass but the ball was just out of reach of our new forward.

Bowers, who reached the first round of this season’s FA Cup before narrowly losing to Lincoln City, missed a glorious chance to equalise when Lewis Manor put a free header wide – and they were soon made to pay.

On 25 minutes, Andre Coker, who started wide on the left, produced a sumptuous freekick from 25 yards into the top corner (pictured) to double our lead to the delight of the 365 crowd.

Bowers, whose pacey winger Quentin Monville gave our defence plenty to think about, had a strong penalty claim turned down before Nathan McDonald was forced into a superb stop after the visitors got in behind us.

Yet how our opponents still had 11 men on the pitch by halftime is a mystery. Jamie Dicks, who had already been booked for an ugly challenge on Sam Youngs, was lucky to survive a second yellow after another bad foul, this time on Mo.

It was no surprise when Dicks was taken off at the interval to save him from further punishment but within five minutes of the restart Bowers cut the deficit.

Youngs was dispossessed halfway inside our own half and the dangerous Monville drilled the ball home via a deflection.

The next goal was always going to be crucial and within just two minutes we restored our advantage. Mo shot straight at keeper Michael Beenley who somehow spilled the ball and the quick-thinking Cunnington was first on hand to finish it off.

Beenley then redeemed himself with a fine save from Coker as we went for a fourth and Mo headed wide after Cass stood the ball up at the back post.

But Bowers weren’t finished and three times came within a whisker of again getting back into a highly watchable encounter, only to be thwarted by lack of finishers in the box.

“Another hard-working performance against a well-drilled resilient Bowers team” was how Andy Leese summed it up.

“An even game which we shaded with our finishing. We had to defend deep at times especially in the second half where I felt we got opened up a bit too easily at times.”

“We needed the third goal when it came. Some players earned a rest and it shows how the squad will be needed in the coming weeks. We are back in a great league position which I’m sure we would all have taken at the start of the season.”