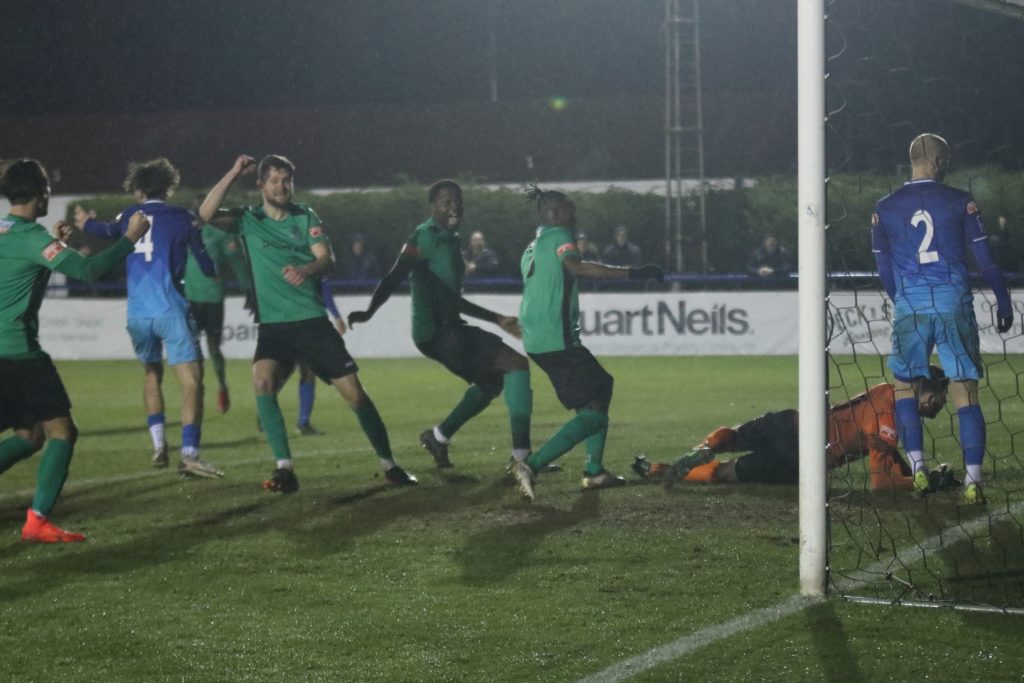 Not even a temporary floodlight failure could save Enfield Town’s blushes as we slumped to a 4-1 defeat at local rivals Wingate and Finchley on Tuesday, marking our first back-to-back reversal of the season.

There were few positives to take from a night where we made a couple of defensive changes from Saturday’s loss to Bishop’s Stortford but were still very much second best against opponents who were clearly fired up for the occasion managed by former Town skipper Marc Weatherstone.

It was a game in which everything Wingate tried came off whilst our efforts were either well saved or narrowly off target.

But that doesn’t excuse a performance that will have infuriated the management team and only adds to the desperate need to get back to winning ways against Leatherhead on Saturday to rekindle our playoff hopes, with most of the other contenders now heaping on the pressure.

Almost before we could settle we were a goal down as Theo Ofori’s half-hit shot appeared to have either been deflected in off Lee Chappell or deceived Nathan McDonald.

On 20 minutes it got worse as Chappell was dispossessed near the corner and Dylan Kearney’s cross was turned in by man of the match Antonis Vasiliou – on loan from Barnet just to add salt the wounds.

Sam Youngs and Mo Faal both went close to halving the deficit  while Jack Cass was thwarted when one on one with Ben Goode in the Wingate goal. Then  Mo ran half the length of the pitch and set up Cass who narrowly failed to hit the target.

But W and F always posed a threat and just before the break, we fell further behind to a wonder strike as Vasiliou gave McDonald no chance from 30 yards.

There was still time for the hosts to come close to a fourth as McDonald saved superbly, again from Vasiliou, before a floodlight failure brought a temporary halt to proceedings.

When the lights came back on, Town needed to brighten up their ideas and they did so as Rian Bray moved up from the back to rifle the ball home from close range (pictured).

Bray put another snapshot just wide in a sustained period of Town pressure as we were finally in the ascendancy.

But the pivotal moment came on 66 minutes.  Mo won a penalty, only to see his spotkick saved by Goode and watch the follow-up go wide. Perhaps, bemoaned many Towners fans afterwards, it is time that penalty honours were switched to Cass who, after all, used to take them for Bishop’s Stortford.

A double substitution following a halftime change of formation briefly looked promising but on 78 minutes it was game over. McDonald parried but couldn’t hold a rasping freekick and as our defence hesitated, Kearney was first to the rebound.

Worryingly we looked poor throughout when we didn’t have the ball whilst some of the players appeared leggy and Andy Leese didn’t mince his words.

“It was the most shambolic performance of the season…we got what we deserved,” fumed Andy.

“I think we turned up with a misplaced confidence as a team thinking we can win and somehow we need to find a fighting spirit and resilience that has gone missing.”