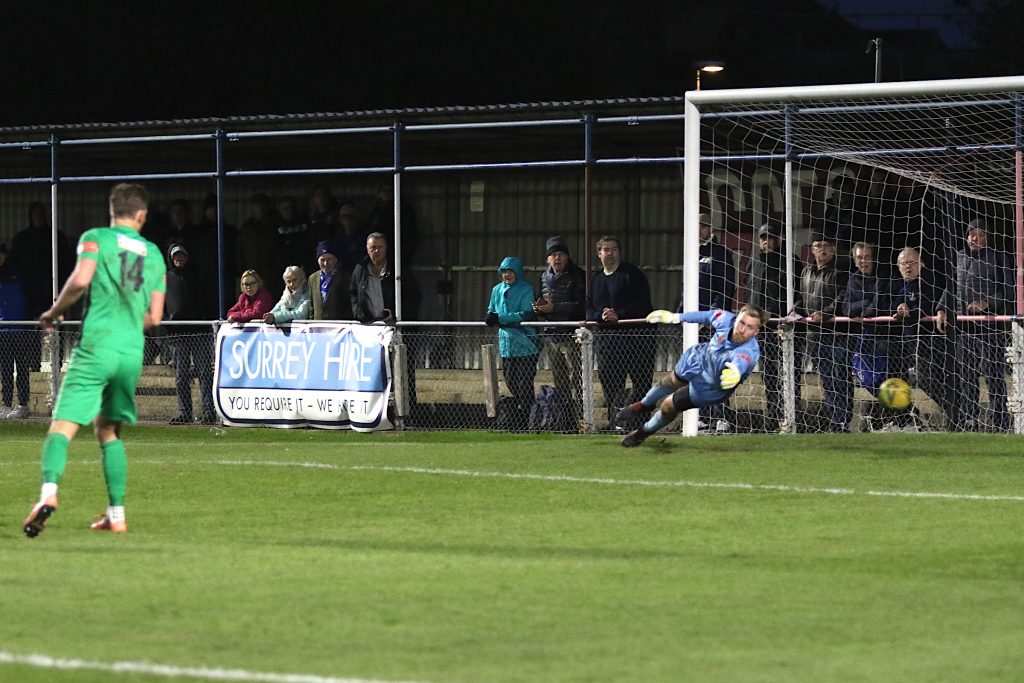 Another hard-fought win, this time over a spirited Corinthian Casuals side, kept Town in second place in the league as we came up with two late goals after the home side had taken a surprise lead.

We may not have been at our best but who knows how significant this victory might be come the end of the season.

The only charitable description of a goalless first half would be ‘shapeless’ as both teams struggled to string any coherent moves together, largely due to a stiff end-to-end breeze.

A string of injury breaks also disrupted the flow of the game, and resulted in almost four minutes of added time.

Town at least started on the front foot, forcing three early corners, the last of which was volleyed over the bar by Harold Joseph.

The game then settled into a lengthy period of disjointed skirmishing with too many passes blown off course by the wind and not a single shot on target from either side.

Only a couple of dangerous crosses from Keiron Cadogan threatened Nathan McDonald’s goal, while Town’s best chance came from a typical Mo Faal surge from the halfway line, but Enfield’s top scorer delayed his pass too long and was dispossessed.

Improvement at the start of the second half? Well, not really. More misplaced passes and overhit through balls, and, to be honest, the game had the words ‘goalless draw’ running through it like a stick of Blackpool Rock.

Casuals, however, weren’t reading that particular script. After 56 minutes, Emmanual Mensah found himself in far too much space on the right wing and the  home winger scooted into the box and buried a low shot into the far corner.

Things did not look good for the Town at that point though Taaffe managed our second on-target shot of the game that was well held by home keeper Danny Bracken.

Incisive football from either side was at a premium before we suddenly turned the game on its head.

With 16 minutes remaining, Mo tiptoed his way into a shooting position and his effort flew out of the keeper’s grasp, over his head and into the net for the equaliser.

Now Town pressed forward in search of a winner. The home side conceded a stream of free kicks as Ryan Kirwan and Lyle Della-Verde attacked down the left.

The winner came courtesy of a scorcher from Della-Verde whose freekick was played back into his path, his subsequent low drive finding the bottom left corner of Bracken’s net.

Town saw out the remaining six minutes, and seemingly a week of added time, without undue difficulty, and a hard-won three points were secured, made even sweeter by the fact that of the other contenders in and around the top, only Worthing were victorious.