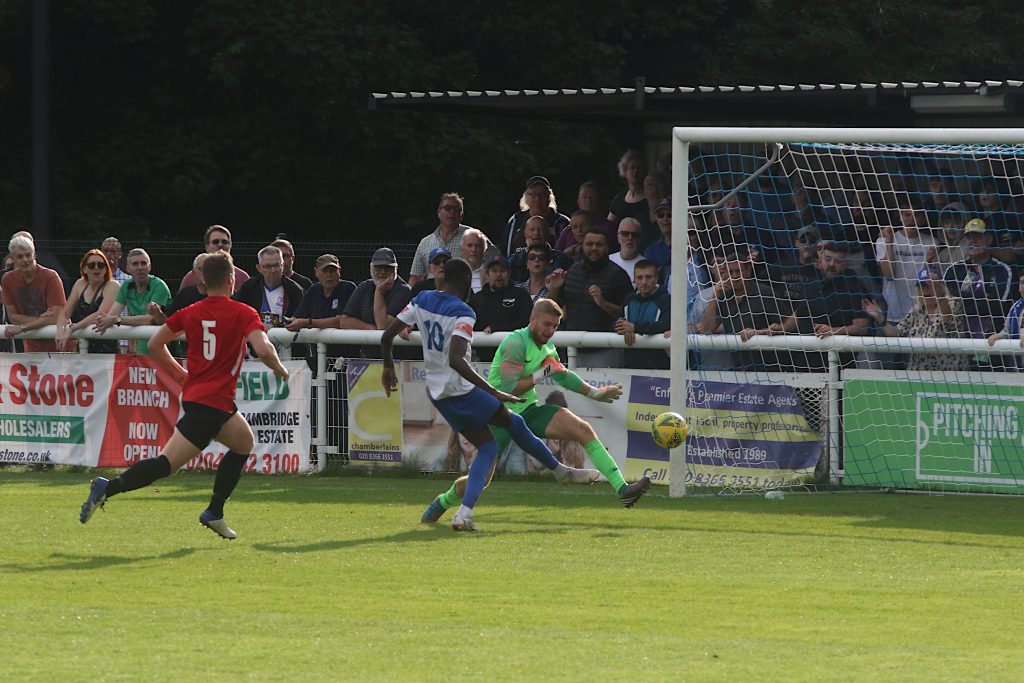 A bad day at the office resulted in us being held 1-1 by Step 5 Hadley in the FA Cup 2nd qualifying round on Saturday but the main thing is we are still in the hat.

Our visitors from Arkley in Barnet may have been two levels lower but they certainly didn’t play like that and had the best player on the pitch in Solomon Ofori who troubled us throughout with his pace and trickery.

After the euphoric last-gasp win over Haringey, it looked rather like a case of after the Lord mayor’s show as we huffed and puffed against opponents who are unbeaten in all competitions but who, on paper at least, we should have dealt with comfortably.

But cup football is full of surprises and as so often in the past, we struggled against a team from a lower division and will need to up our game in Tuesday’s replay to stay in the competition.

Unusually given our decent start to the season, our passing was sloppy both in our own half and in trying to break down the Bricks.

Too many of our players were off the pace. By contrast, Hadley, who knocked out our near-neighbours Enfield FC (formerly Enfield 1893) in the previous round, had nothing to lose.

Well organised and compact, they had had the best chance of the opening half when Nnamdi Harold-Egole bore down on goal but somehow blazed over.

The closest we came in the opening 45 minutes was when Adam Cunnington’s fierce volley cannoned off a defender for a corner but considerable praise has to go to Hadley keeper Luke Ward who dived bravely at the feet of our forward players whenever we got a sniff.

Town needed a reaction after being too one-dimensional but it was Hadley who struck first.

Four minutes into the second period Ofori, showing fantastic control, pounced on a throw-in to give his team a shock lead.

Frustratingly for Cunnington, just when we most needed his aerial threat he had to be replaced having earlier been pole-axed by Ward, albeit fairly, when running on to a Lee Chappell pass.

We so nearly got back on level terms when Percy Kiangebeni struck the post, only to put the rebound agonisingly wide.

As the minutes ticked away and we looked like crashing out of the much-prized competition, the management team turned to the bench in an effort to save the day.

And it was the last of those subs, the unlikely beanpole figure of the previously little used Matt Walsh who set up the equaliser with 16 minutes left of regular time.

Receiving the ball from Mo Faal, Walsh burst through on goal with virtually his first touch, bringing a superb stop from Ward. Fortunately for Town, Mo (pictured) was first on hand to lash home the rebound.

Instead of us taking the game by the throat, it was Hadley who posed the greater threat late on. Twice Ofori nearly won it for them, first thwarted by Nathan McDonald when one on one with our keeper, then seeing his chip go narrowly wide with Nathan caught off his line.

There was a collective sigh of relief from the majority of the 421-strong crowd at the final whistle – and no doubt among the players too.

Below-par performances happen to every team and we eagerly await Monday’s 3rd qualifying round draw, hoping for an improved display in the replay with Hadley 24 hours later.