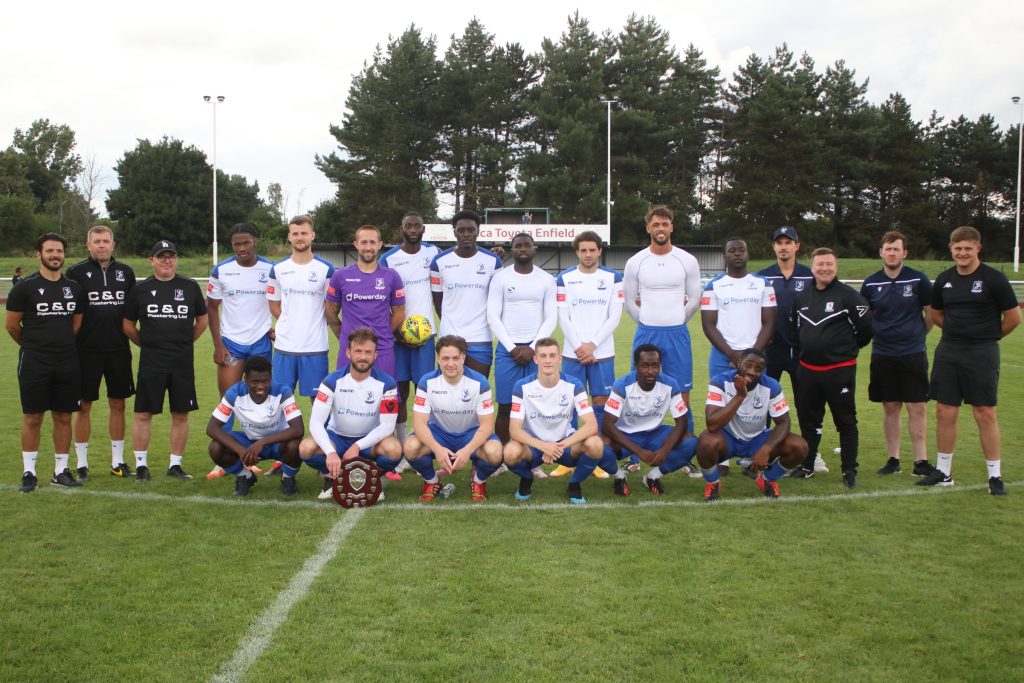 Mo Faal turned back the clock with a superb hat-trick  as we picked up the FSA Supporters’ Shield, awarded annually to fan-owned clubs in a one-off fixture, with a comprehensive 3-0 win over Step 4 Grays Athletic on Saturday, writes Andrew Warshaw.

One level above our opponents, we were good value for the win as we warmed up for the new season with a second straight clean sheet.

The game marked both teams’ final pre-season workout, with the Town  travelling to Carshalton on Saturday and Grays hosting Bury Town.

Following stints at Bolton and Barnet, Mo looked like his old self as he relished putting on an Enfield shirt again, having been a cult hero during his earlier spell with us.

Whilst his first goal on 13 minutes was unspectacular , taking advantage of a low cross that was pushed into his path by the Grays keeper, his second was a classic finish,  rifling the ball home from Gambian international Ebrimah Sawani’s sweet pass six minutes after the break.

In between, Percy Kiangebeni almost got on the scoresheet with a mazy run down the right and a fierce shot that was palmed away for a corner.

Grays had a couple of half-chances but in the main, Nathan McDonald was largely untroubled and on 56 minutes Mo made the game safe with another well-taken goal, bursting down the left before shooting low and hard into the corner, a welcome sight for Towners fans so close to the start of the 2021-22 campaign.

After the game, part of our 20th anniversary celebrations, the trophy was presented on the pitch by the FSA’s Richard Irving before a party was held in the marquee to the sounds of 80s’ cover band Bazooka Joe, who we thank wholeheartedly for their time

Here’s how we lined up: