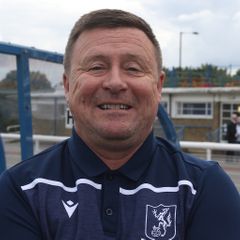 Andy Leese has expressed his excitement at having re-signed Mo Faal, one of a string of players who in the last few days have committed themselves to the club ahead of the big kick-off on Saturday, writes Andrew Warshaw.

Charley O’Keefe, having originally agreed to join us, has now signed for Welling United instead.

“Mo has committed to us until Christmas and I’m absolutely delighted,” said Andy.

“It became evident over the last couple of weeks that Billy Bricknell would not be able to commit to us for a few weeks yet, and with Adam Cunnington injured we had to look again at our forward options.”

“Mo and I have always kept in touch since he moved away and I asked him to train when I knew he was back home. Things moved quickly and Mo needed to play football having not had many opportunities in the last few months. Signing Mo again has certainly lifted the dressing room and I hope it does the same for the fans.”

“I am sure Mo and Adam will form an exciting partnership in Bill’s absence. Adam could be fit for next weekend. The squad is almost there. It’s been a tough pre-season in many ways, the strangest I have known in my 24 years of management and coaching.”

Following the departure of  O’Keefe, who played a couple of pre-season games for the Town, Andy was quick to bring in Kirwan. “He’s a young versatile player who has played lower-league football but has impressed us with his performances in the last few games.”