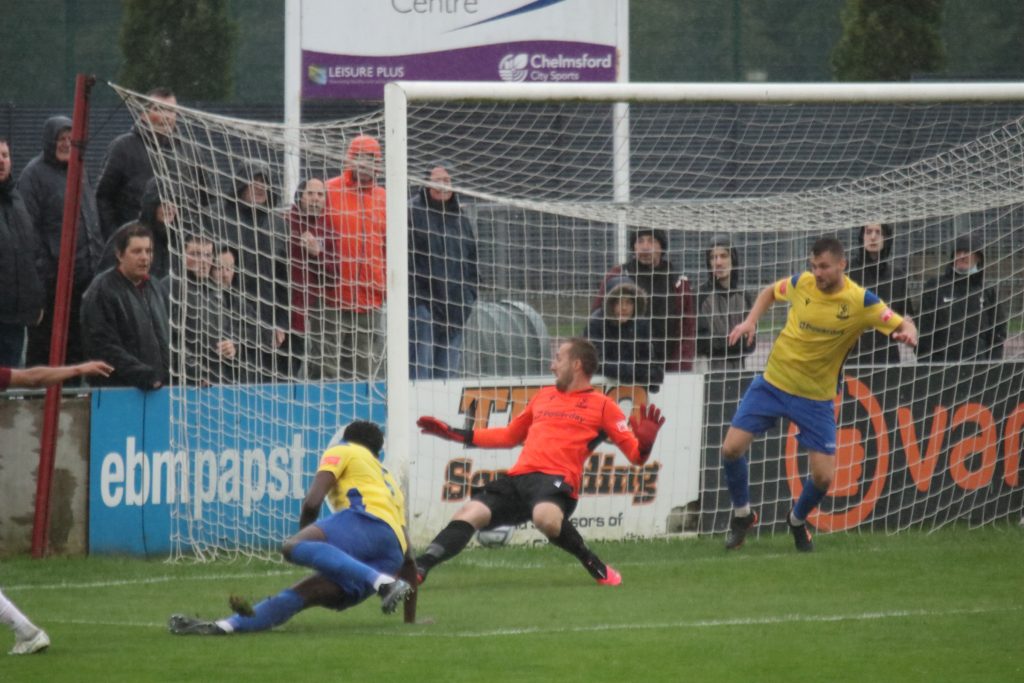 Enfield Town’s interest in this season’s FA Cup came to a disappointing end with a narrow 1-0 defeat at Conference South Chelmsford in the third qualifying round, played in atrocious weather that even the proverbial ducks would have struggled with.

Town’s travelling faithful braved the driving rain and lashing winds and outsung the home crowd as we arguably deserved a draw against Step 2 opponents who we fought hard to match but who ultimately coped with the conditions ever so slightly better.

Setting up in a 3-5-2 formation, things started badly for Town as Mo Faal needed lengthy treatment after going down in the very first minute with what, at the time, looked like a potential game-ending injury. Luckily Mo was eventually up on his feet but, for once, had a tough day as for the most part he found it hard to get much change out of a well-marshalled home defence. That could largely be said for all our attacking players though the rain-soaked pitch negated any chance of consistent ball control while the officials did us few favours over the 90 minutes.

Chelmsford, who have had an inconsistent start to the season, hardly troubled us for the opening 20 minutes and had Adam Cunnington’s header from Lewis Taaffe’s freekick hit the target, we would have surely taken the lead. Within seconds of Adam’s miss, Chelmsford so nearly made him pay as skipper Tom Wraight rattled the crossbar at the other end after the at times unplayable Tom Blackwell skinned Lee Chappell to cross from the right.

In truth there was little to choose between the sides as we gave as good as we got. Mo in fact could easily have us the lead on the stroke of half-time as he latched on to Rian Bray’s through-ball, only to misdirect his shot.

Whatever the Chelmsford manager said at halftime, they came out for the second period with more urgency and fluidity, finding it easier to play into the wind having over-hit too many first-half passes in the final third. Only a magnificent stop by Nathan McDonald prevented Wraight putting The Clarets in front and as they started to take control, we were forced into conceding a flurry of freekicks and corners, some of them unnecessary.

It looked for all like we had gone behind when Simeon Jackson appeared to convert from a tight angle. Somehow the ball was deemed to have been cleared off the line despite plenty of protests from the home side.

Moments later, however, the pressure told as a corner was flicked on by Winfield and Jackson netted with an acrobatic overhead kick. City went close to adding another as a flowing move led to a one-on-one chance for Dara Dada, only for Nathan to pull off a world-class save.

With the clock ticking, we came far more into the game and might easily have snatched a draw as we gave it a right go in the last 20 minutes. Cunnington somehow missed his kick from five yards while substitute Andre Coker, whose cameo appearance had Chelmsford worried, would have equalised but for a timely last-ditch block with keeper Jacob Marsden beaten.

There were some dejected players at the final whistle but no-one can fault us for desire, spirit and teamwork in appalling conditions. In the end it wasn’t quite enough and we now return to league action against Kingstonian on Tuesday.