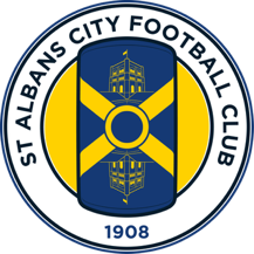 A mixture of registered players and triallists were put through their paces on Tuesday on a searingly hot evening that required several drinks breaks, writes Andrew Warshaw.

As expected, Step 2 St Albans, who knocked Forest Green Rovers out of the FA Cup last season, proved formidable opposition especially since Town were without a number of unavailable key players.

A couple of our players took early knocks which meant changes had to be made quicker than the management might perhaps have anticipated but everything is still in its development phase as we build towards that all-important opening league game in  mid-August.

St Albans soon grasped the initiative and went ahead after 12 minutes with a lightning move down the right which a triallist, believed to have been on Brentford’s books, finished off by finding the corner of the net.

Nathan McDonald was forced into a fine save from  Liam Sole but we, too, were creating chances.

Fouled just outside the boss,  Cass almost found the net with the resultant freekick, then planted a header wide after good work by Wynford Marfo.

Right on halftime, however, the visitors doubled their lead with the kind of goal that demonstrated their National League South status as they showed dazzling pace, again down the right and again converted by the same triallist.

Changes aplenty were made at halftime to give as many of the squad as possible a run-out and we got back in the game on 67 minutes as the St Albans keeper took out Juevan Spencer and Sam Youngs scored from the spot.

Adam Cunnington came within a whisker of levelling but couldn’t quite adjust his feet before Saints made the game safe.

First Chez Isaac stole in at the far post to lash home a corner, then Ryan Kirwan was unjustly adjudged to have given away a penalty and Joe Neal did the rest.

“Another decent workout against good opposition” was Andy Leese’s appraisal. “It gave us a chance to look at some more players and different combinations as well as getting valuable game time for a couple who have missed some sessions.”