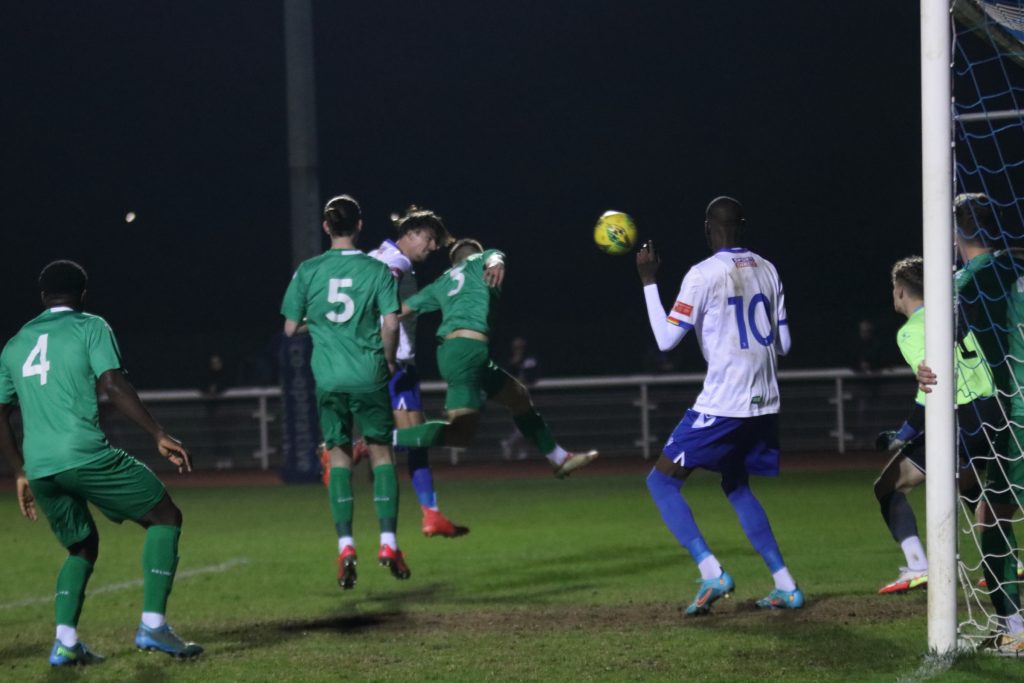 Four straight wins have put us within touching distance of the playoffs after yet another tight, nail-biting encounter against a Leatherhead team that played way above its relegation-threatened status.

In a game of precious few chances, the points were won after just seven minutes courtesy of yet another of those near-post headers by man-of-the-match Sam Youngs who ghosted in to convert a Lewis Taaffe corner (pictured).

Sam clearly relished the occasion and put in another outstanding shift but it was our defence – not always our strong point – which really caught the eye against opponents who took the game to us for long periods and will perhaps feel they deserved more.

Special mention has to go to the seemingly ageless Lee Chappell whose two vital interceptions soon after we took the lead almost certainly prevented an equaliser.

Lee, like his colleagues at the back, put on a superb “Thou Shalt Not Pass” display as we managed to snuff Leatherhead out whenever they threatened.

He made another fantastic block late in the first half and moments later a low cross was fizzed into our box but fortunately found no Leatherhead player.

For all their possession, however, the Tanners might well have fallen further behind when Mo Faal spooned a terrific chance over the bar after taking advantage of defensive hesitancy.

Leatherhead, who have had three managers this season, are unrecognisable from when we played them earlier in the season and in fact had only one player in their squad who featured back October.

With a brand new team, they are banking on a great escape and showed commendable passing ability though to be fair Nathan McDonald hardly had a notable save to make, largely due to being protected by those in front of him.

To make sure of the points, the management team switched to three at the back late on as we made it four wins on the spin after those three back-to-back defeats to move to within one point of second-placed Bishops Stortford.

Winning without playing at your best is the sign of a team with spirit and confidence and we have made a habit of that over the last couple of games.

More of the same and a playoff spot seems assured though no one is yet taking anything for granted.

“Another valuable win which came the hard way,” said Andy Leese. “Leatherhead belied their league position, were well organised and competed for everything. We were fantastic defensively  and limited them to few opportunities. We were having a terrible little run and to bounce back the way we have shows what we are about.”