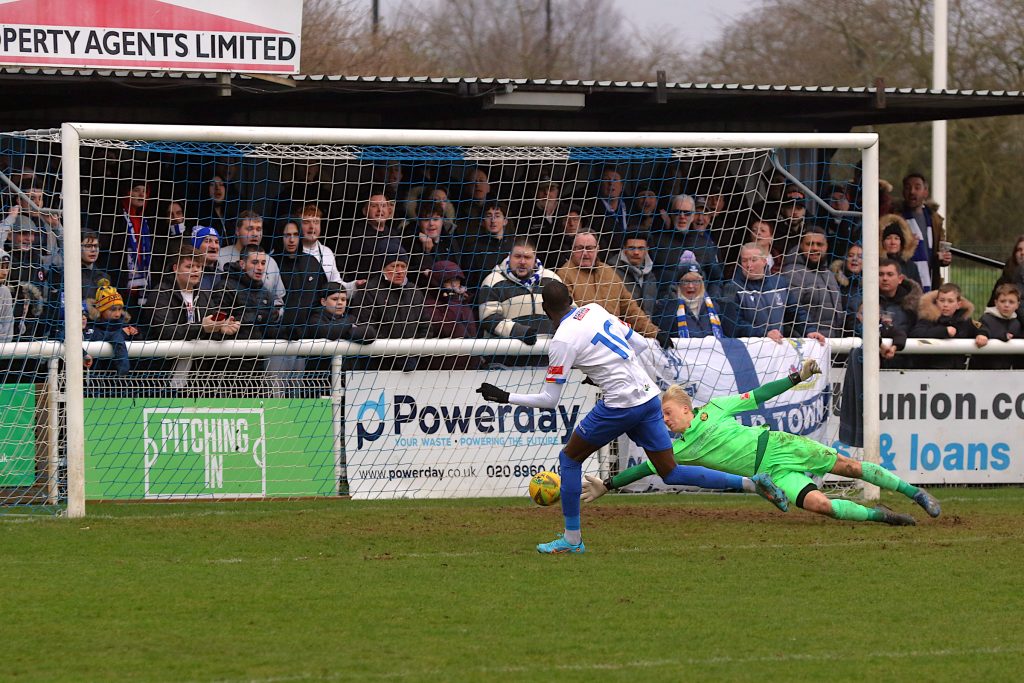 That’s more like it! After three straight defeats, Enfield Town rekindled their play-off hopes by sweeping aside relegation-threatened East Thurrock on Saturday to move into fourth spot.

The visitors have radically changed management and playing staff since being dealt an 8-0 drubbing in the corresponding fixture back in October but were still largely second best.

Manny Maja was restored to our starting line-up after a lengthy injury layoff while Percy Kiangebeni was suspended.

On a day when girls and ladies were let in for free to mark International Women’s Day, boosting the attendance to almost 500, we were on the scoresheet after just six minutes with a textbook goal straight from the training ground.

A strong wind and muddy pitch rendered conditions far from ideal but Town, playing a flat back four, were hardly troubled in a dominant first half.

Lyle Della Verde was particularly eye-catching with several inswinging corners but it was from open play that he almost created a second goal as he sent Mo Faal away down the left, only for Mo to miss the target by whisker. Two minutes later we went close again as the Thurrock keeper just managed to prevent the ball trickling over the line.

In their only threat of the opening half, Johnny Ashman failed to take advantage of Jerry Gyebi’s weak back-header but on 31 minutes we extended our lead as  Cunnington, showing commendable persistence, wrested possession from the opposition and squared for Mo to finish with precision (pictured).

Gyebi almost made it 3-0 with a bullet header from another Chappell throw and the only blemish of the first half was a booking for otherwise excellent Sam Youngs for kicking the ball away.

The Towners could have been out of sight by halftime but the Rocks re-emerged with a far more positive mindset and decided to have a go, Martins Dantas-Carvalhi particularly prominent as he twice weaved his way dangerously into our box.

With the visitors pushing forward, Nathan McDonald was finally called into action with a couple of decent saves while Gyebi was cautioned for a late challenge.

Nevertheless, the better chances still went our way as Thurrock had precious little end product.  Scott Thomas drove wide, Sam Youngs brought a flying save from  Arthur Janata and with the next goal always likely to prove crucial, we wrapped the game up on 69 minutes.

Cunnington was fouled 25 yards out and, not for the first time this season, Della-Verde’s sublime left-foot strike flew into the net.

There was still time, in a 4 v 2 Town counter-attack, to make it even more comfortable, only for Mo’s final shot to be smothered by the keeper.

“A much better day at the office” is how Andy Leese summed up proceedings ahead the all-important showdown at Hornchurch next Saturday.

“Getting the points was all that mattered and we did that without being troubled too much. We gave East Thurrock a couple of opportunities but dealt with what they had to offer.

“We have more games like this to come in the next six weeks. We need to focus on ourselves and on getting as many points as we can to guarantee a playoff spot. That was our objective at the start of the season and it hasn’t changed.”