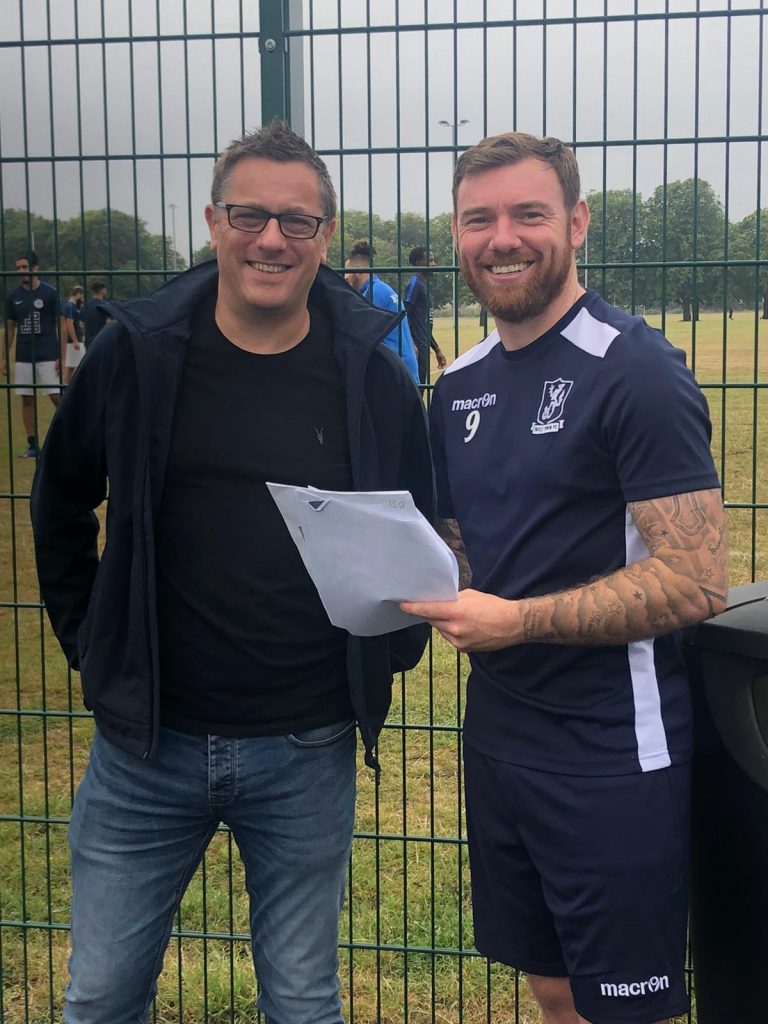 Andy said “I’m delighted, particularly in the unique circumstances we are all in with the resumption of competitive football still a little way off, that the spine of the squad is coming together, and I am confident of additional players signing within the next week or so.  I am in constant dialogue with a number of potential recruits and, as well as more familiar names from last year, I am sure there will be some new, exciting names to announce in due course.

“We have used the first couple of behind-closed-doors friendlies as a chance to look at a wide spread of possibilities, as is always the case at this time of year.  From the third game onwards, against Chelmsford City, it is likely that there will be some more settled line-ups, substitutions etc as the management team look at individuals and permutations with a view to paring down to the squad we would like to put in place for the competitive resumption, whenever that may be.

“I’m delighted that Billy, Marc, Lewis, Nathan and Ryan have shown a commitment to stay with the club during a time when we are all hoping for a resumption in September but at the same time knowing that that sort of timeframe is far from certain.  In the meantime, as I mentioned in an earlier update, we have an extended number of friendlies to keep the guys match fit so that we are ready whenever we need to be.

“I have been pleased overall with the initial couple of games, which have been very much with enhanced fitness in mind as well as the chance to look at players who have shown an interest in the club. They have very much been a stepping-stone between our midweek training sessions and the additional strength and sharpness that only comes with playing matches.

“This year there is more time than usual to plan for the season ahead and, with a number of players returning from holidays and other commitments, we will not be rushing to assemble a squad until we are certain we have the best fit available – not least with budgets being tighter than ever in the wake of the pandemic.  Scott Thomas and Lyle Della-Verde were able to take part in the friendly against Brentwood Town – which was a good workout – and Jon Muleba should be available soon following work commitments.  As I’ve said before, on the injury recovery front Lewis Taaffe has made very good progress, while James Potton – recovering well after such a serious injury – is still undergoing rehab and is probably more likely to re-enter the fray around October time.

“I must admit, although the closed-doors and other precautions regime is something we are all still getting used to, the spread of pre-season games has probably made it a slightly less breathless exercise than usual assembling a squad for the new campaign.  I am grateful to supporters for their patience as ever at this time of year and very much hope that we can all see each other at matches in the not too distant future.

“I can confirm a new appointment at the club – that of Head of Football Operations.  Graham Dodd, who was part of the Under 23s management team last season, is taking up this role for 2020-21.  Graham and I go back a long way – we worked together at Broxbourne for a time – and he will be an invaluable asset going forward. With no U23s for the time being at least, Graham will be the focal point for linking the Under 18 teams, including the new academy, that we will be running this year, as well as being a conduit between the various managers.  He will work very closely with the management team to ensure that communication lines are optimised and so that we can preserve the pathway between youth and senior football. Graham will also do some scouting as part of his role.  I’m delighted Graham is on board; he is a very knowledgeable football man.

“In rather less-than-good news, our excellent goalkeeping coach Ed Thompson is moving on for personal and work related reasons.  Ed’s departure will be a big miss as he has been an integral part of the management team and is second to none as an innovative goalkeeping coach, following his successful time as a player.  Ed knows he is always welcome back at the club and it goes without saying that I am very grateful for all the great work he has done during his spell with us.  In the meantime, we are looking to replace him as soon as possible but he will be a difficult act to follow!  In the meantime, Alfie Bonfield, son of former Town keeper Darren will be working in tandem with Nathan so that they can keep each other on their toes.”

Following this on-field news, there are plans to issue an off-field update within the next couple of weeks, including the possibility of a further zoom link meeting for members.  Please watch this space!