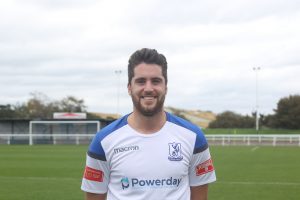 Wide midfielder James was originally released by Watford at Under 16 level and had a spell with Hemel Hempstead Town before going off to university. Upon his return he joined Chesham United, playing 186 games in a four-year stint, scoring 55 goals. He moved back to Hemel in 2014 and subsequently spent several seasons at Conference South level, including netting for the Tudors in a 2014-15 FA Cup first round 3-1 exit at Bury, before a move to Royston Town in June 2017. He signed for Town in July 2019.