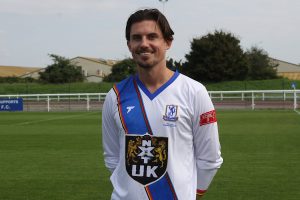 A former Chesham United player, Sam originally made his Generals’ debut at Didcot Town in March 2011, and then, after a spell away, returned to the Meadow in the summer of 2015. He has enjoyed three spells at Rugby Town, including scoring a dozen goals in season 2012/13, and has also spent time at Redditch United, Hemel Hempstead Town, Banbury United, Ware and Halesowen Town. He has now made over 100 appearances in a Town shirt.