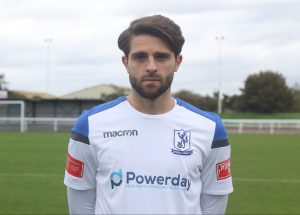 A versatile defender, Josh signed for the club in January 2020 from Billericay Town, making his debut in a 3-2 win at Cheshunt. He arrived at Harlow Town in October 2013 for the first of two spells there (96 appearances in total) from Potters Bar Town, and he represented the Hawks between 2013 to 2015, helping them to the Isthmian Division One North play-offs twice. He transferred to Wealdstone in the summer of 2015 prior to joining Billericay Town. He made over 50 appearances for Billericay, lifting the Essex Senior Cup, Isthmian League Cup and Isthmian League title in 2017-18 before moving on to East Thurrock United. His previous other clubs include Hampton & Richmond Borough, St. Albans City, Biggleswade Town, Hendon, Northwood and Olympic Kingsway (Australia) as well as West Ham United and Northampton Town as a youngster.