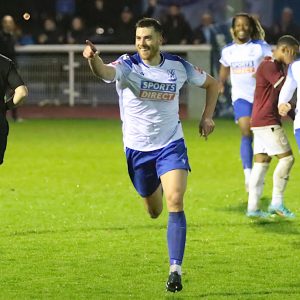 Central defender Lewis Knight joined Enfield Town at the end of October 2022 on a month’s loan from Margate, and scored in his first two league games in a blue and white shirt: on his debut in a 4-2 win over Herne Bay, and a sensational late winner over Hastings United. He brings with him plenty of prior experience in non-league, having previously played at step 2 with the likes of St Albans City, Concord Rangers and Maidstone United.