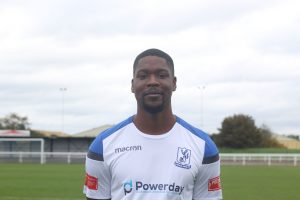 6’ 3” striker Shaun scored 50 goals in 53 league starts between 2015 and 2017 in the first of two spells at Corinthian-Casuals and won player of the year awards while at King George’s Field. He signed for Town in February 2020. Previously also with Hitchin Town, Aldershot Town, Wealdstone, Eastbourne Borough, Leatherhead and Concord Rangers, he signed for Town in February 2020.