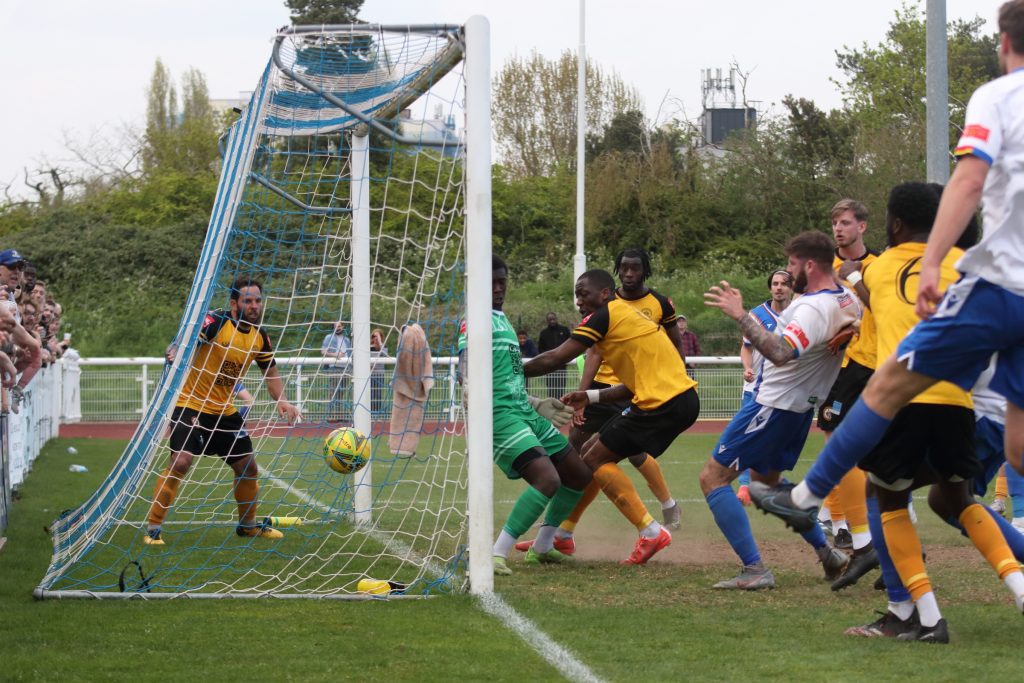 In front of our biggest gate of the season, just under 800, Enfield Town secured the point they needed to mathematically make sure of a playoff place courtesy of hattrick hero Jake Cass.

Congratulations to the players and management team for fulfilling the goal we set out to achieve  at the start of the season back in August.

John Muleba was given a rare start against Cray while Cass continued up front in the absence of the still-injured Adam Cunnington.

The last three meetings between the sides had produced 21 goals and this was no different but was by no means straightforward. We were pushed all the way by a team scrapping for their lives at the other end of the table and who almost spoiled the Good Friday party.

Cray were on a four-game losing run and because of injuries had to call up U18s keeper Nathan Boamah for his senior debut .

But he produced an outstanding performance with a number of terrific saves especially in the final 20 minutes when we were in danger of losing back-to-back matches against relegation-threatened teams and applied mounting pressure.

On 11 minutes Boamah somehow got to a trademark Lyle Della-Verde freekick with a brilliant one-handed tip over but Cray were clearly not in the mood to be over-run and caused us several anxious moments at the back, Nathan McDonald producing his own tip over from the dangerous Jamie Yila.

The first goal could have gone either way but thankfully went to us. On 28 minutes Mo Faal was hauled back just as he was about to shoot and Cass buried the penalty confidently.

Scott had to be replaced by Percy Kiangebeni but Town were back in front with the goal of the game, a thunderous 25-yard strike from Cass that almost burst the net.

Still we couldn’t put Cray away, however, and they responded again through Richie Danquah’s bullet header from a freekick on the stroke of half-time.

Cray began the second period with renewed intent and went in front for the first time on 66  minutes through Anthony Cook with an accomplished finish after the ball ricocheted off Rian Bray.

Cue a double substitution and a storming Town rally. Cass steered the ball inches wide after being put through by Lewis Taaffe — who scored twice when the sides drew 4-4 in January – while a Mo volley produced a flying save from 17-year-old Boamah.

Finally, with two minutes to go, the pressure told as Cass secured a point by bravely turning in Sayoud Bilal’s corner (pictured).

He almost notched a fourth to win the game, only for his left-foot volley to produce another wonderful stop from the teenage keeper.

“It’s a fantastic achievement even though we made hard work of it today,” said Andy Leese after we secured a playoff semifinal spot, almost certainly an away tie at Hornchurch or Bishop’s Stortford .

“Some of the defending today was disappointing but Cray have some excellent individuals who really turned up and are a much better side than their position suggests.

“I’m delighted with the character shown and Cassie ran the line superbly and has found his form again. Hopefully the pressure will be off in our last two games. Obviously the objective is to finish as high as we can and we’ll be at it again at Potters Bar on Monday and again on Saturday.”