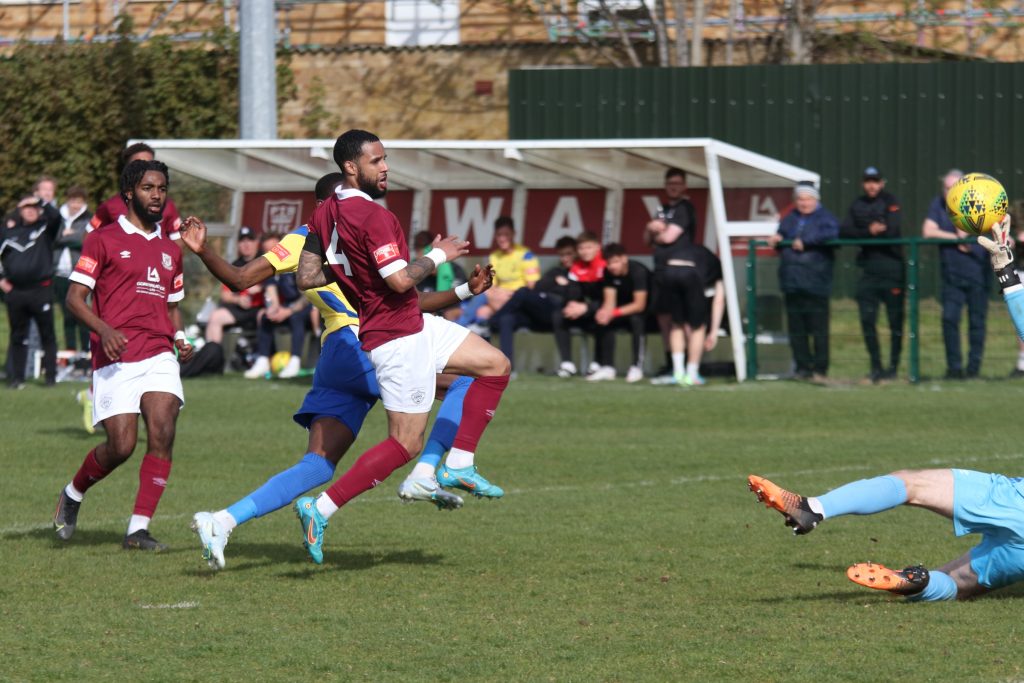 Enfield Town warmed up for the final league game of the season with a comfortable 2-0 derby win at Potters Bar on Easter Monday that saw each and every player in a Town shirt put in a terrific shift and ensure we gained our record points tally as as Isthmian League club.

With our playoff place already in the bag, the management team took the sensible decision to rotate the squad – and it worked a treat.

Mo Faal, who is fasting during Ramadan, and Sam Youngs both started on the bench, with the fit-again Adam Cunnington up front with Jake Cass, Bilal Sayoud at wingback and Percy Kiangebeni occupying central midfield with skipper Scott Thomas out injured.

Apart from a brief spell in the second half when the Scholars came into the game, we were largely in control with everyone playing for their place with so much at stake.

Jake Cass, arguably back to his best form, was particularly prominent and was almost on target with just a couple of minutes on the clock.

The lead we had threatened to take came on 17 minutes with yet another trademark Lyle Della-Verde left-foot strike after fine work by Sayoud.

Joe Boachie, Bar’s best player on the day, almost sneaked in to capitalise on some hesitancy at the back but most of the half-chances were still coming our way, much to the delight of the Town support who made up a majority of the 562 attendance.

Whilst the Scholars improved after the break, we were still very much the more composed side and after 58 minutes almost doubled our lead. Lewis Taaffe, who put in one of his best displays in a Town shirt both at the back and going forward in his wingback role, fed Cunnington who was narrowly ruled offside as he rifled the ball home.

At the other end, the pacey Boachie produced a thankfully unconverted sparkling run and cross while Tyler Christian Law put a free header over as Bar briefly threatened.

But with Percy, who revelled in being given the captaincy for the day, and Manny Maja controlling midfield, we posed the greater physical threat and always looked capable of extending our lead.

Which is exactly what happened with seven minutes to go.  Shortly after both coming off the bench, Sam Youngs placed a sublime header through to Mo who just managed to control the bobbling ball and shoot past Kacper Kurylowicz for his 33rd league goal of the season (pictured) despite the desperate attempts of a defender to keep it out.

There was still time for both Cass and Youngs to produce further efforts in what was a thoroughly satisfying afternoon full of desire and energy, made all the more so by the fact that Hornchurch were defeated.

This means that if we win our last regular league game on Saturday at home to Bognor and Hornchurch somehow fail to beat Wingate and Finchley, we will finish third instead of fourth and secure that all-important home playoff tie against the Urchins.

All to play for still, then, and let’s hope former Towner Marc Weatherstone, now in charge of W and F, can do us a favour.

“I never felt we were in danger, they didn’t trouble us too much,” said Andy Leese, who started with a back three and wingbacks, a system we often revert to during matches.

“We got the ball first which we didn’t do on Friday against Cray. It was a solid, efficient, professional performance. The mindset now is absolutely vital over the next 10-14 days and it started today.”