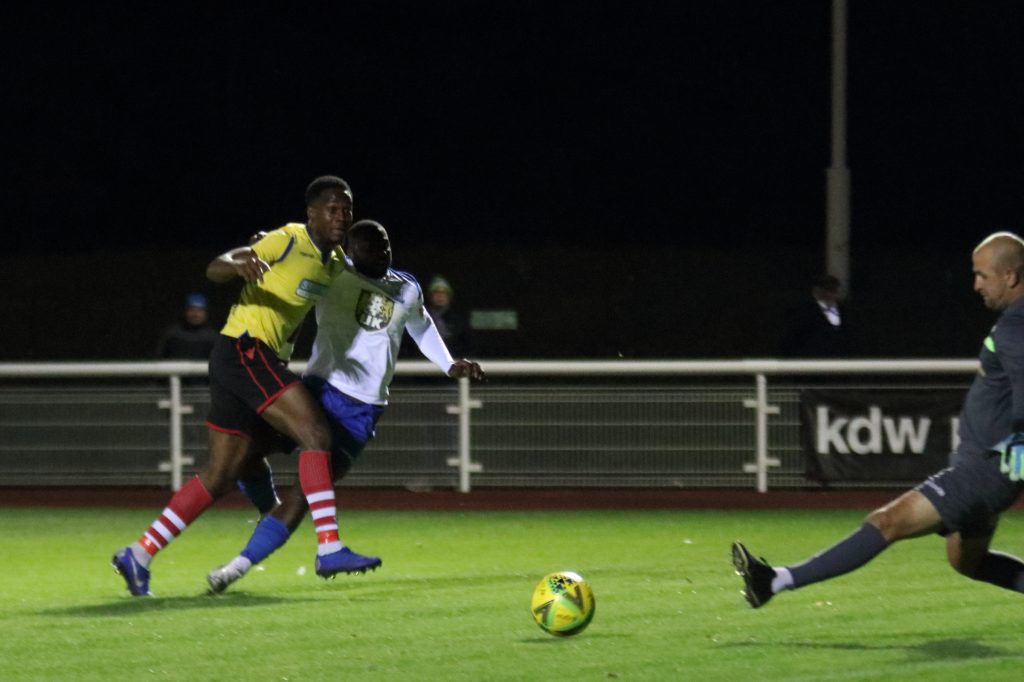 Enfield Town surged to third in the Isthmian Premier Division, and bounced back from the setbacks of their last two games, with a gutsy and richly deserved 2-0 victory over league leaders Kingstonian on Tuesday evening.

Despite Saturday’s cup exit, home well and truly is where the heart is for the Towners and they extended an already formidable record at Donkey Lane, playing some excellent football to record their ninth home league win on the bounce – a feat never before achieved by an Enfield Town team.

They certainly started the brighter as the visitors were very nearly caught napping inside two minutes, with Muhammadu Faal seizing on an underhit backpass and working the ball to Percy Kiangebeni, who forced ‘keeper Rob Tolfrey into action. Five minutes later, former Ks man Andre Coker saw his effort charged down on the edge of the area as Town took the game to their opponents and sustained the early pressure.

Another former Kingstonian forward, Lyle Della-Verde, looked lively all half and produced some delightful interplay down the right flank with Faal before bending a shot wide of the mark. On 20 minutes, however, the hosts were rewarded as a Lee Chappell long throw was only cleared as far as Ryan Kirwan, who nodded on towards Kiangebeni for the midfielder to slot a finish into the bottom-right corner; his second goal of the campaign duly greeted by the home fans positioned behind the goal.

Ks certainly had their chances and were by no means quiet, with the lively Daniel Ajakaiye twice producing efforts which needed saving by Nathan McDonald. On the half-hour mark Ajakaiye controlled smoothly and rolled his defender but once more the resulting shot was well kept by McDonald. Town supporters held their collective breath as a delicious cross from the right was met by Kershaney Samuels, but saved at point-blank range.

With 33 gone, however, it was Town who struck once more. Faal chased down an overhit pass and, bringing the ball under control on the touchline, skipped beyond his defender with finesse before squaring for the incoming Coker to tap in and double the advantage.

After the restart, it was the away side who started on the front foot, full-back Bryant Akono-Bilongo unmarked at the back post to side-foot a volley into a crowd of players from a corner. The best chance of the half came seven minutes later through an Enfield counter attack, as Kiangebeni was released with a slide-rule through ball. His powerful effort beat Tolfrey, but incredibly cannoned off both the underside of the crossbar as well as the post before bouncing out.

Town didn’t let up, and Kirwan – handed a start at left-back for the first time in over a month – produced several swashbuckling forward runs to skip away from some no-nonsense challenges. He combined with Coker who nutmegged his man to set Faal clear, but an archetypal finish was denied by the offside flag.

Kingstonian thought that they had found a way back into the match on 62 minutes when Kenny Beaney’s flighted corner was glanced into the net by Jerry Puemo, but the linesman was well-positioned to spot that the Ks defender had in fact punched the ball in with his hand.

A series of late substitutions arguably didn’t help the visitors’ cause as they continued to press, but Town defended resolutely to see out the match and maintain another home clean sheet. Town visit Leatherhead on Saturday afternoon, and will look to continue the momentum provided by an impressive home win over the league’s early pace-setters.