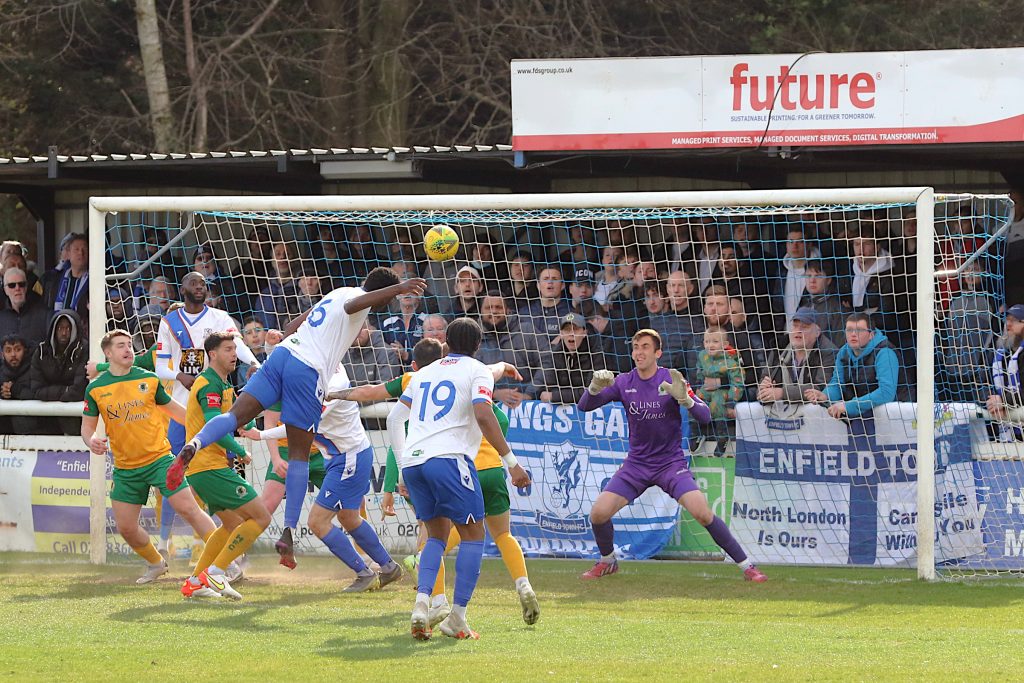 Enfield Town made it six wins on the bounce and are now within touching distance of that much coveted play-off spot with just four games to go.

Jerry Gyebi’s towering header midway through the second half put paid to a Horsham side that competed well but didn’t do enough to justify sharing the spoils.

With a couple of other key results going our way, mathematically we are one win away from securing a playoff spot, a testament to the players and management staff who have worked tirelessly to get us to where we are now.

It might seem like job done already as we remain third just a point behind Bishop Stortford but we want to finish as high as we can to get that home draw and to  try and beat our record points tally.

Games against Horsham invariably throw up a goalfest but whereas the corresponding fixture in January produced nine goals, this one was an entirely different affair. Control was difficult on a hard pitch and in tough conditions that included bright sun, driving rain and even a flurry of snow.

The visitors had arguably had the best chance of a well contested opening half when Eddie Dsane’s flashing header grazed the top of the bar with six minutes on the clock.

As Town responded, a lightning three man move down the left almost paid dividends while Manny Maja brought a superb tip-over save from Sam Howes and Sam Youngs almost broke the deadlock with a 25-yard freekick.

Whilst we just about shaded the first half, Shamir Fenelon came within a whisker of giving the Hornets a shock lead just after the restart but blasted his shot just wide.

Cue a timely double substitution, one of them forced, as Jake Cass replaced the limping, leg-strapped Adam Cunnington and Lyle Della-Verde took over from Lewis Taaffe.

Cass came close with a superb turn and half-volley before Mo Faal provided the game’s outstanding piece of individual skill, picking the ball up close to the halfway line and leaving not one, not two but FIVE Hornets players in his wake as he burst forward.

The only thing lacking was Mo’s finish as he got too close to the keeper before deciding to shoot.

The points were ultimately settled by an unchallenged Jerry Gyebi who rose above the visitors’ defence (pictured) to head home a Della-Verde corner on 68 minutes.

There was still time for Della-Verde to force Howes into a scrambled save from a fizzing 30-yard freekick and for Faal to square the ball for Cass who couldn’t quite get nearer enough to convert.

You can’t ask for more than a six-match winning streak at this time of the season, partly down to the fact that we have had a settled squad for most of the campaign with a fantastic team spirit drilled into them by the management team.

“Another demanding game which only changed when we altered our shape in the second half,” said manager Andy Leese. “Horsham are a very decent team but we limited them to very few clear opportunities on goal.”