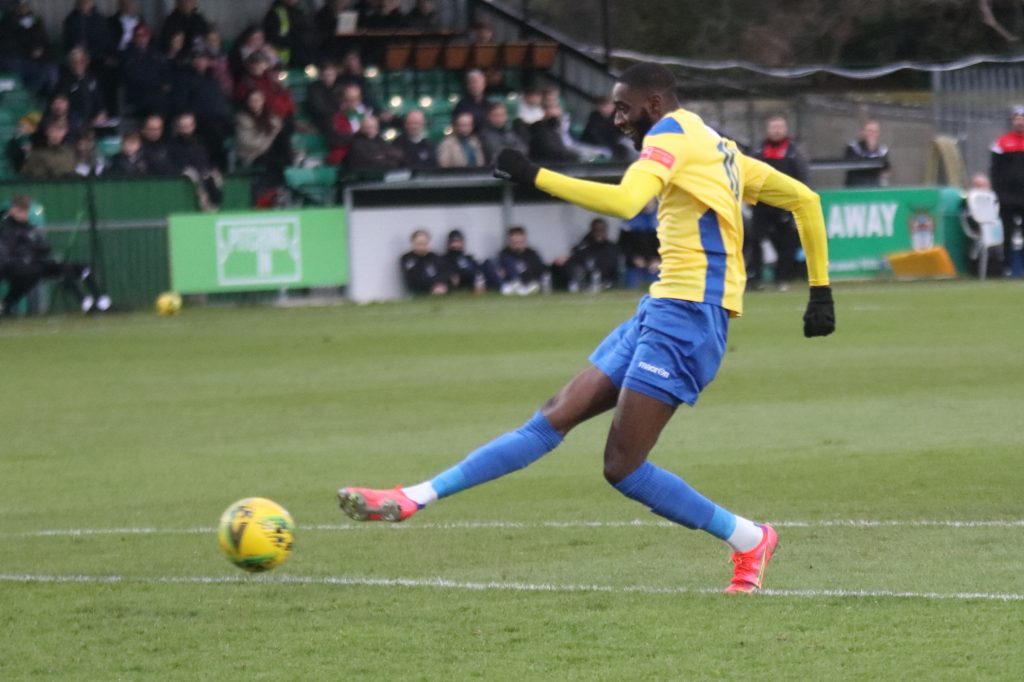 Two points dropped after a lightning start, or one gained after being reduced to 10 men?

You could probably argue it both ways as we came away from Bognor Regis with a rare draw on Saturday that pushed us down one place in the table into third.

To say we began on the front foot is an understatement as we tore into Bognor from the kickoff.

As early as the third minute a right-wing cross was headed over the bar by Cunnington while our new-look defence dealt efficiently with three Rocks corners.

We were soon in front when an eighth-minute freekick by Andre Coker found Mo Faal who got ahead of his marker to volley superbly into the top corner.

We carried on in the same vein, forcing the home defence into mistakes and on 13 minutes doubled our lead.

Bognor gave the ball away on the halfway line and  Cunnington set Mo free to run half the length of the pitch and slot the ball wide of the keeper.

Town continued to dominate and another attack found Percy Kiangebeni in the penalty area by the touch line. His pass found Sam Youngs whose shot was blocked, the ball falling to Chappell whose volley flashed just over the bar.

After 20 minutes Bognor started to get a foothold in the game and found more and more space especially down Town’s left flank.

Nathan Odogonyero was denied by Nathan McDonald when clean through but eight minutes before the break our lead was halved, Odogonyero poking home the rebound after Nathan, with a rare mistake, spilled Jake Flannigan’s effort.

Town were lucky not to concede an equaliser when Bognor’s Charlie Hall found space in the box, only for Harold Joseph to produce an excellent challenge.

We were forced into an unfortunate change at halftime as Ryan Kirwan replaced the injured Joseph – arguably our best defender in recent weeks.

Bognor continued where they left off and yellow cards were dished out to Sam Youngs and Percy Kiangebeni.

Jordan Mongoy’s volley missed the far post by inches and things got even more difficult for Town when, on 63 minutes, we found ourselves a man short.

Manny Maja, having already been booked,  was shown a second yellow for kicking the ball away and will now frustratingly miss the eagerly anticipated FA Trophy tie at National League Eastleigh.

Scott Thomas was quickly sent on for Andre Coker to help with a backs-to-the-wall last period as Bognor smelt blood and poured forward.

Odokonyero’s low shot was well saved by McDonald but the Rocks had to wait until the 87th minute to equalise, the pressure finally telling as Mongoy headed in Joe Dandy’s fierce cross.

Mongoy then shot over while another  Dandy cross was deflected agonisingly wide.

To say we didn’t get the rub of the green was an understatement, however, one example being Percy having his shirt pulled by a defender just as he had a clear run on goal, with only yellow produced by the ref.

And yet we might so easily have dramatically snatched it deep into stoppage time.

Mo, put through by Sam Youngs, squandered the chance of a hattrick when one on one with Amadou Tangara, his shot clipping the keeper’s shoulder.

“It was a massive physical effort from the boys to stay in the game in the second half,” said manager Andy Leese. “Maja is disappointed with what he did and will learn from it.

“It was good game management under pressure but perhaps we should have put the game to bed in the first half. We are still in a great position in what is proving to be a very even league. A week of hard work  and preparation now lies ahead and we will assess to squad to see how we tackle Eastleigh.”

Thanks to John Dolan for contributing heavily to this report