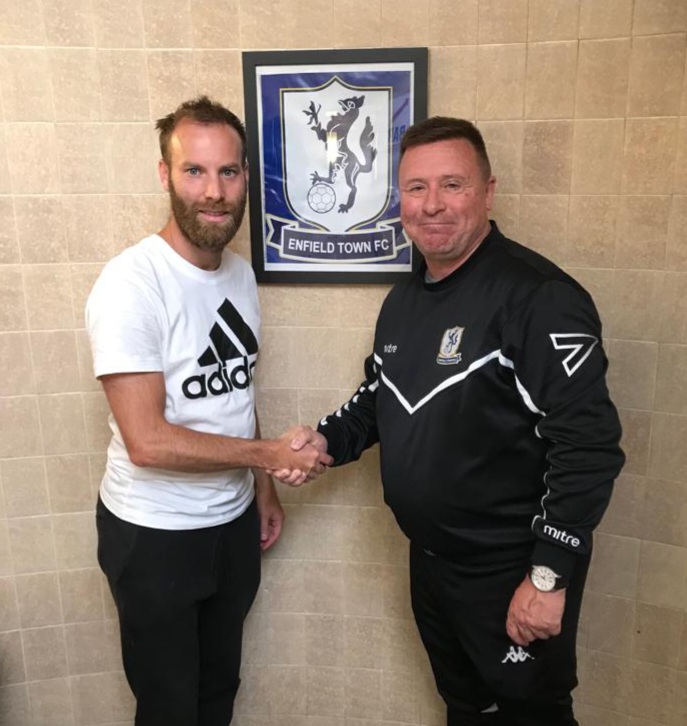 When James Dayton, our newly-signed winger, was offered the chance to come and play for Enfield Town, he didn’t think twice, writes Andrew Warshaw.

Born in the borough, James lived much of his early life in Ladysmith Road not far from the QEII and, as a four-year-old, would go and watch the old Enfield.

Not just watch. He also played for them even though he hadn’t reached the requisite age of five.

“My step grandad took me over to the club and told them they had to take me even though I was still only four,” James explained. “I ended up playing a year above my age, if you like.”

The rest, as they say, is history. James joined Crystal Palace as a 10-year-old and, when the time arrived, went on to enjoy a long professional career that embraced clubs in both England and Scotland.

Now 33, after a season at national league south Dulwich Hamlet, he is coming back to his roots even though he had several other offers.

“I’m getting on a bit now and whilst it might sound cliched, the chance to come back and go full circle, if you like,  is a wonderful feeling,” said James. “The gaffer didn’t really need to sell me the club. I knew last year they just fell short so I’m here to try and help them go one better.”

“The first two training sessions have been great. The lads have really welcomed me. I could tell straight away why they’ve been up there for the last couple of campaigns. I can already see the togetherness in the group. That counts for a lot when you want to push for promotion.”

James is too modest to say what qualities he will bring to the club but 17 years of experience is certainly one of them.

“I may have lost a little bit of pace but I want to help in any way I can. I’ve won two promotions and what I will say is that I will give 100 percent in every game.”