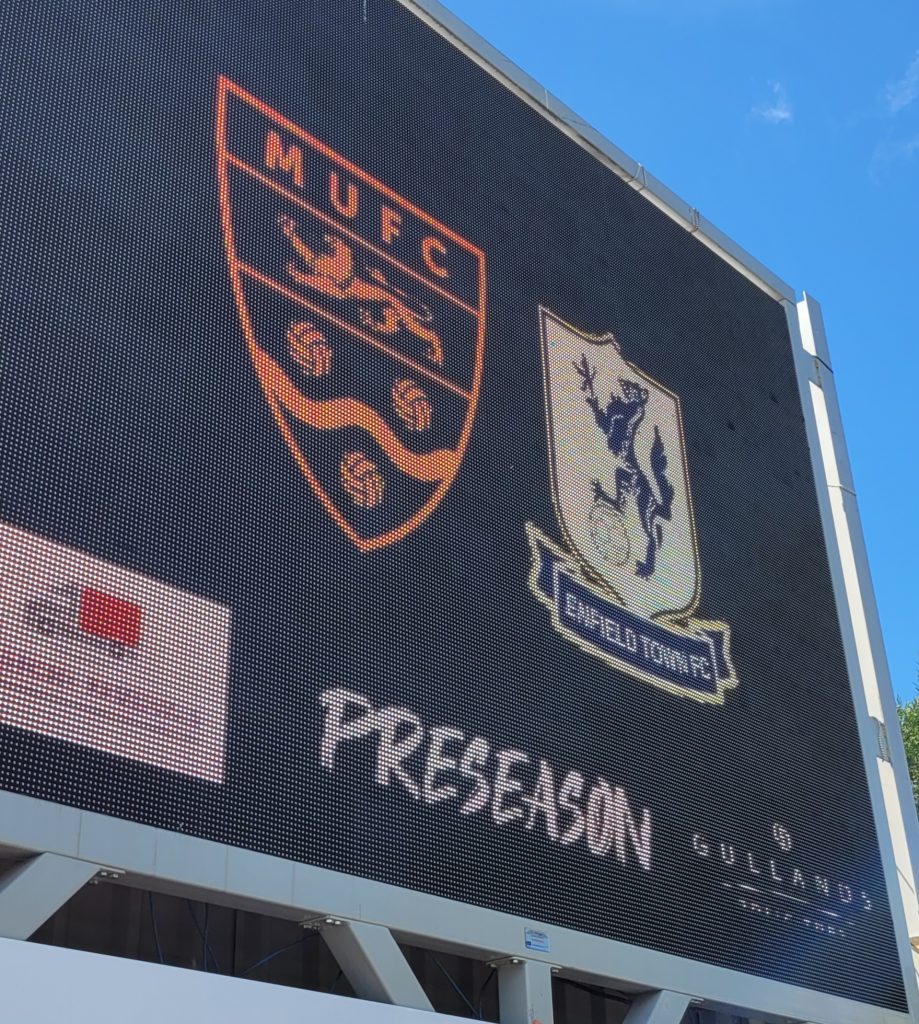 Maidstone United inflicted Enfield Town’s first defeat of pre-season with a comfortable 6-1 win on a sweltering afternoon at the Gallagher Stadium.

In truth this was a very useful test for our gradually-developing squad against National League opposition, and while the hosts demonstrated their quality throughout, Town did fashion a number of chances which on another day might have seen them leave with more than the single goal for their efforts.

Both sides attempted to build during the opening exchanges, though the hosts had the first real chance as James Alabi spun his marker well but was denied by the legs of the returning Nathan McDonald. The Town ‘keeper was powerless a couple of minutes later, as Sol Wanjau-Smith found room along the left-hand channel and squared to Sam Corne who had time and space to pick out the bottom corner.

Not that this appeared to dent the visitors’ confidence, as Jake Cass lined up an effort from 20 yards and was only denied an instant equaliser by the crossbar. Just as Town looked to grow into the game, however, Maidstone hit a second as Roarie Deacon was released down the right and pulled back for Henry Woods to steer home. Again Town broke beyond the halfway line and tried in vain to create – often lacking a clinical final pass – and again Stones were ruthless in their response by adding goals three and four within eight minutes. Summer addition Alabi skipped past two defenders to curl one in from the edge of the area, before he played a role in the fourth; drawing in a Town defender and allowing Wanjau-Smith freedom to latch onto a looping pass and finish across McDonald for four.

To their credit, Town recovered and began to work some clearer opportunities towards the end of the half; Jake Cass played in behind and narrowly denied while attempting to round goalie Yusuf Mersin, before Enfield did pull one back on 36 minutes. Cass was put through for a carbon-copy chance, this time opted to shoot, and while his effort was well repelled by Mersin’s feet, Marcus Wyllie was on hand to knock in the rebound for his first Enfield Town goal.

Ryan Kirwan, playing in a more advanced role down the left, met a header from a free-kick before two huge chances for each side on half-time as Alabi rattled the post with an audacious scissor kick; at the other end, Marcus Wyllie’s persistent pressing on the edge of the Stones box allowed him to dig out a low cross towards Cass, whose shot on the slide bobbled agonisingly wide of the mark from close-range.

Town introduced Adam Cunnington for Wyllie, Wynford Marfo for Lewis Taaffe and academy product Lucas Jordan for Ryan Kirwan in the second period as McDonald was again pressed into action to deny a Maidstone trialist and then Regan Booty with two good stops. Cunnington miscued a header and Jordan showed some promising involvements, including an impressive solo run along the left flank; the resulting corner met by a combination of Nathan Smith and another academy graduate, Kian Wilkes. The two-step difference between the sides would eventually tell twice more in the final six minutes, as substitutes Dominic Odusanya and Perri Iandolo each produced terrific long-range efforts to put the gloss on the home side’s victory.

“I’m not keeping count; I never have done in a pre-season game”, said Andy Leese.

“Some real positives, one or two little negatives… some good lessons for us as well today.”

“We’re playing against a very good outfit today who have all the momentum having come out of the division below and then added some players. You can see the difference in the levels.”