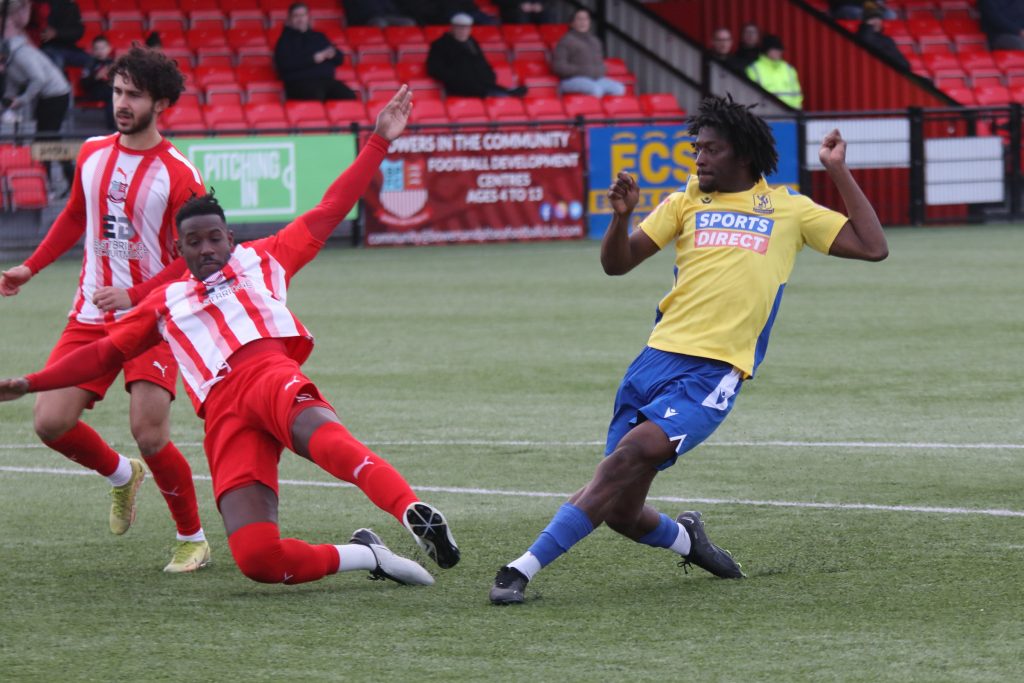 What a way to bounce back as Enfield Town recovered from the recent blip against Kingstonian  with a resounding win in Essex on Saturday to move up to third pending the result of today’s Cray-Bishop’s Stortford showdown.

Town’s regular centreback pairing of Lewis Knight and James Richmond returned after suspension and were rarely troubled while Dequane Wilson-Braithwaite moved seamlessly into the rightback spot with  Juevan Spencer missing out with a knee injury.

Also back in the starting line-up was Andre Coker who looked sharp and hungry on both wings while Jake Cass took his place on the bench after a period of unavailability.

It was Andre who put us in front in the very first minute, pouncing on defensive hesitation to jink his way into the box and finish with aplomb (pictured).

From then on we never looked back on an artificial surface that had the ball zipping about following a pre-match downpour.

Appeals for a penalty for shirt pulling on Sam Youngs went ignored but the next time Sam was impeded in the box after 34 minutes, the referee had no hesitation in pointing to the spot.

Sam was actually running away from goal when tripped by Bola Daowuda and dusted himself down to double our lead, Joseph Osafhae diving correctly but only managing to get a faint hand to the ball.

Almost everything Bowers tried went through former Towner Billy Crook but Oscar Shelvey’s header off target was all they could show in the opening 45 minutes.

To add to their  frustration, both manager James Collins and one of his coaching staff were shown yellow cards for haranguing the referee at the interval though Town were well worth their lead.

Any chance of a home comeback was firmly snuffed out on the hour when Youngs cleverly nipped in with an outstretched leg to convert a glorious cross from Marcus Wyllie, another who had an eye-catching afternoon.

Five minutes later we were out of sight as Richmond fired home via a deflection from 12 yards after great work by Coker. Dexter Peter was unable to keep it out despite a last-ditch attempt.

Without ever losing our shape and being physically far stronger, only in the last 15 minutes did we take our foot off the gas allowing Bowers a consolation goal through debutant Francis Jno-Baptiste.

With tough away games to come against Folkestone and Hastings, Andy Leese was a happy man.

“A much better performance form us today at both ends of the pitch,” said Andy. “We stuck to  a game plan and had a great start.  We continued in the second half and made the game safe.”

“It was good to have a fuller squad to choose from and to have some players back to something close to full fitness. It’s a confidence boost for us as we go into a challenging run of games.”