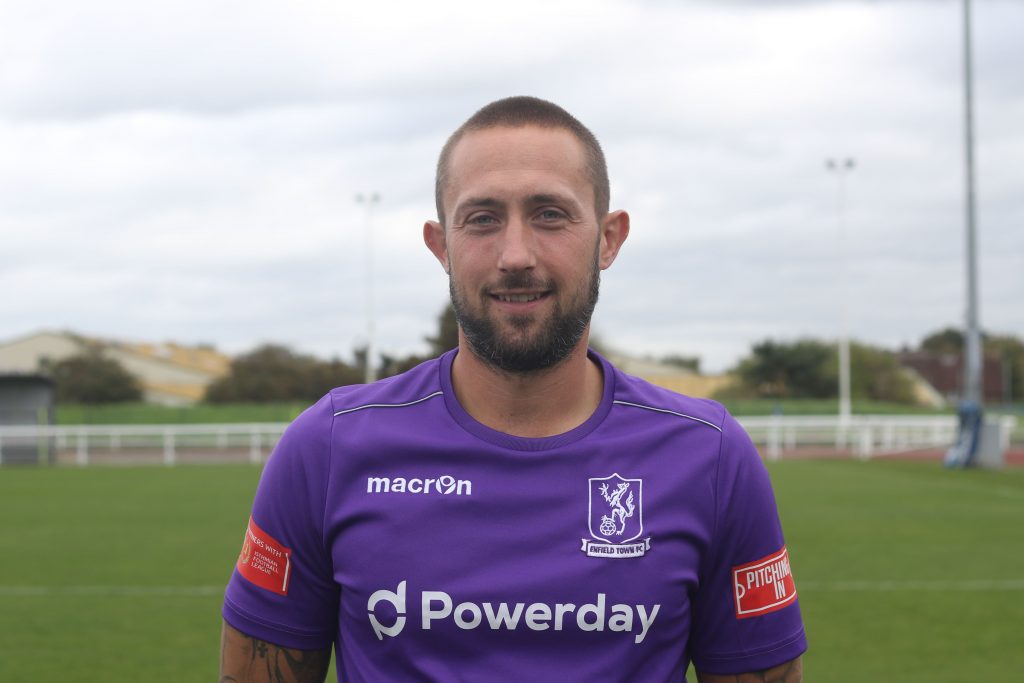 A pulsating encounter that was a wonderful advert for Step 3 sadly brought little reward for Town who succumbed to two late Hornchurch goals, rekindling those painful memories of our playoff semifinal defeat.

One point from two games may not be the start we wanted but it is doubtful we will have too many tougher challenges and Nathan McDonald (pictured) must feel aggrieved and frustrated in equal measure after pulling off four or five stunning saves.

It could certainly be argued we deserved something from the game for a battling performance that said everything about our spirit, industry and camaraderie.

We also had more than a few good chances of our own but Hornchurch, with one of the most dangerous forward lines in the division,  would argue they were the superior team over 90 minutes and carved out more clearcut opportunities.

Having said that, we got off to a lightning start. With virtually the first attack of the game, Jake Cass was unlucky to see his looping header come back off the bar while former Towner Mickey Parcell cleared another effort off the line.

Rian Bray picked up an early booking before our luckless captain Scott Thomas had to leave the field with what looked like a bad shoulder injury and was replaced by Lyle Della-Verde.

The change didn’t phase us, however, and we took the lead on 22 minutes, Cass beating another former Towner Joe Wright from the penalty spot after Della-Verde was fouled.

It was almost 2-0 when the increasingly promising Marcus Wyllie just missed the target from a narrow angle but our lead lasted a mere four minutes, Liam Nash getting the final touch in a goalmouth scramble after we failed to clear.

As Hornchurch upped the ante, McDonald pulled off the first of several smart saves to thwart Tom Wraight. Then Joe Christou skimmed the crossbar but on 38 minutes we were back in front.

Kenny Clark was booked for a foul on Della-Verde, who got back on his feet to  thump home a sumptuous trademark freekick which came off both posts before nestling in the net.

Sam Higgins, scourge of Town in the playoff defeat, saw his bullet header miraculously parried by McDonald who moments later pulled off a remarkable double save with his legs. In between, Wyllie’s snap shot was pushed away at the other end by Wright.

With Hornchurch hurting us through the middle, we needed to keep the ball better and began the second half in precisely that vein.

A Sam Youngs header was mysteriously disallowed for offside, then Sam turned provider for Della-Verde whose shot was saved by the feet of Wright, Wyllie hitting the rebound just over.

But just as in the playoff ,the game turned on a Hornchurch substitution, Ola Ogunwamide causing havoc for the last 30 minutes.

Our resistance was finally broken on 77 minutes when the last in a flurry of home corners was flicked on for Nash to finish at the far post.

Now it was a question of hanging on although James Richmond, who put in another commendable shift at the back,  could have put us immediately back in front, only to plant a header over from a rare Town corner.

A series of last-ditch blocks seemed to have got us over the line for a point . But with six minutes left of riproaring encounter, Ogunwamide sent over a pin-point centre which Wraight finished off with a glancing header.

Still we weren’t finished with both Wyllie and Cass coming close to snatching a draw that would have been reward for all the hard work against an extremely accomplished side.

“We put in a good shift, I’m not going to complain,” said Andy Leese. “We had to reshuffle a bit with Scott going off which was a blow. There were just lapses of concentration, I guess much like the playoff semifinal.”