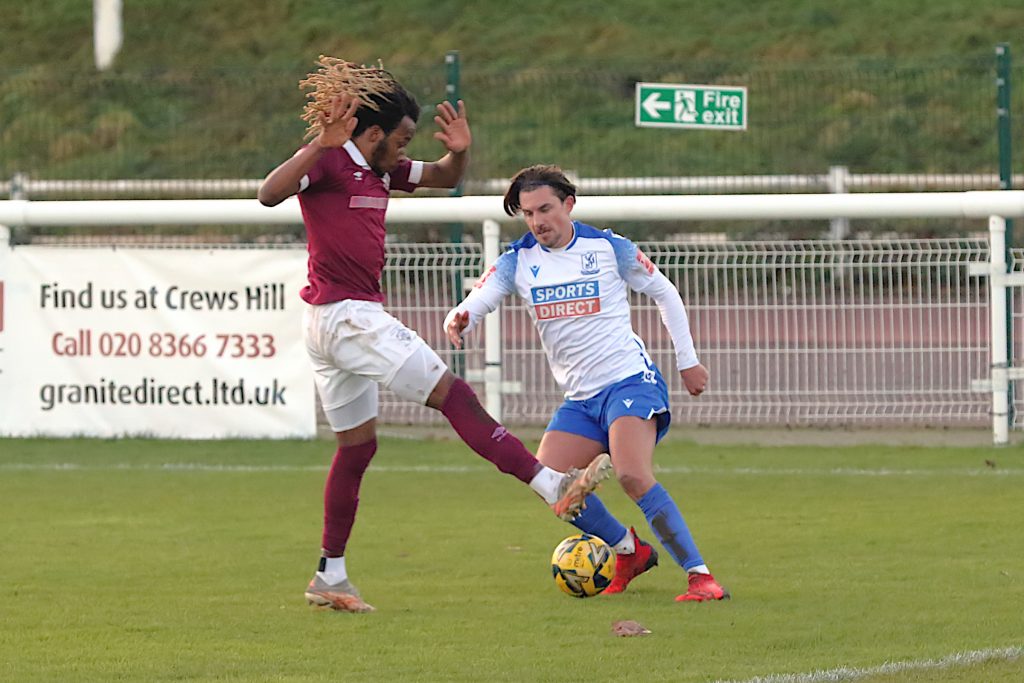 What a way to end the year!

Despite missing a string of players through suspension and unavailability, Enfield Town treated a bumper 600-plus Boxing Day crowd to one of our best performances of the season as we swept aside our near-neighbours.

From one to 11, Andy Leese’s men were superb, negating Bar’s renowned strengths to move up to fifth in the table, capped by a Sam Youngs hat-trick.

Before the game Nathan McDonald was presented with a pair of gloves for winning the AB1 Golden Gloves Awards for November. Well done, Nathan!

Potters Bar arrived five points ahead of us having played a game more. But apart a decent spell either side of their equaliser, the Scholars were second best, especially throughout the second half when we looked like scoring every time we went forward.

The addition of new signing Chez Isaac in midfield had an instant impact in terms of composure, reading the game and picking a pass. The combination of Chez, skipper Scott Thomas and James Dayton across midfield worked a treat, allowing Sam to take up an advanced role in which he flourished.

His first goal, with supporters still coming through the turnstiles,  came with only two minutes on the clock, a close-range swivel and shot after Adam Cunnington — a handful all afternoon for the visitors’ defence — had dummied Marcus Wyllie’s cross.

Stunned into a reaction, the visitors carved  out a couple of freekicks in dangerous positions, both of which were blocked, whilst Town were indebted to Dequane Wilson-Braithwaite for a timely clearance to thwart Nick Dembele.

At the other end, Marcus Wyllie latched on to a terrific long ball by Youngs, only for his shot to be cleared for one of a string of Town corners over the 90 minutes while Isaac and Cunnington also went close to doubling our lead.

For the most part, we denied Bar space to play but on 32 minutes we paid the price for backing off their much-touted skipper Mo Kamara who rifled a 20-yard effort into the corner for 1-1.

Kasim Aidoo then cut through our defence but fortunately lost control at the vital moment before a pivotal passage of play ensued.

Right on the stroke of half time, former Towner Wraynel Hercules, who otherwise had a quiet game and was given trademark stick by the Town faithful behind the goal, saw his looping effort come back off the woodwork with McDonald beaten.

Straight from the restart and in stoppage time,  a four-man Town move ended with Isaac scoring on his debut via a wicked deflection – off Hercules!

In the first attack of the second period, Dembele might have equalised with a toe poke but Town were brimming with confidence and quickly crushed any hope of a Bar recovery.

On 54 minutes, Youngs, who hardly trained while he recovered from his ankle injury,  crashed home a penalty after Cunnington was bundled to the ground. Two minutes later he completed his hattrick, sneaking into the box to head home the cross of the game from Jueven Spencer.

Town weren’t done yet and might well have ended up with at least a couple more.  Cunnington sent a header against the bar before we were awarded a second spot kick.

With Youngs (pictured alongside former Towner Wraynel Hercules) already substituted, his replacement Lyle Della-Verde, having been taken out by Joe Russel, stepped up to take the penalty only for Dante Baptiste to pull off a terrific save.

There was still time for Baptiste to make  another flying stop, again from Della-Verde, to round off a thoroughly satisfying afternoon masterminded by the management team and carried out to the letter by the players.

“We decided on a flatter, tighter midfield three and allowed Sam to get forward,” explained Andy. “The first half was a bit passive but second half we took off and dominated them. I know what Sam is capable of. He keeps himself in fantastic shape, recovered from injury quicker than we expected and loves being here.”

“There were five starters missing from that team today and we had to adapt. So what we did was doubling pleasing.”

“We’ve hardly been out of the top five for the whole of 2022 and I’d like to pay credit to the board for their support.”

Credit goes to Andy, too, as well as the rest of the management team. Onwards and upwards, with our visit to Haringey Borough up next on Jan 2.