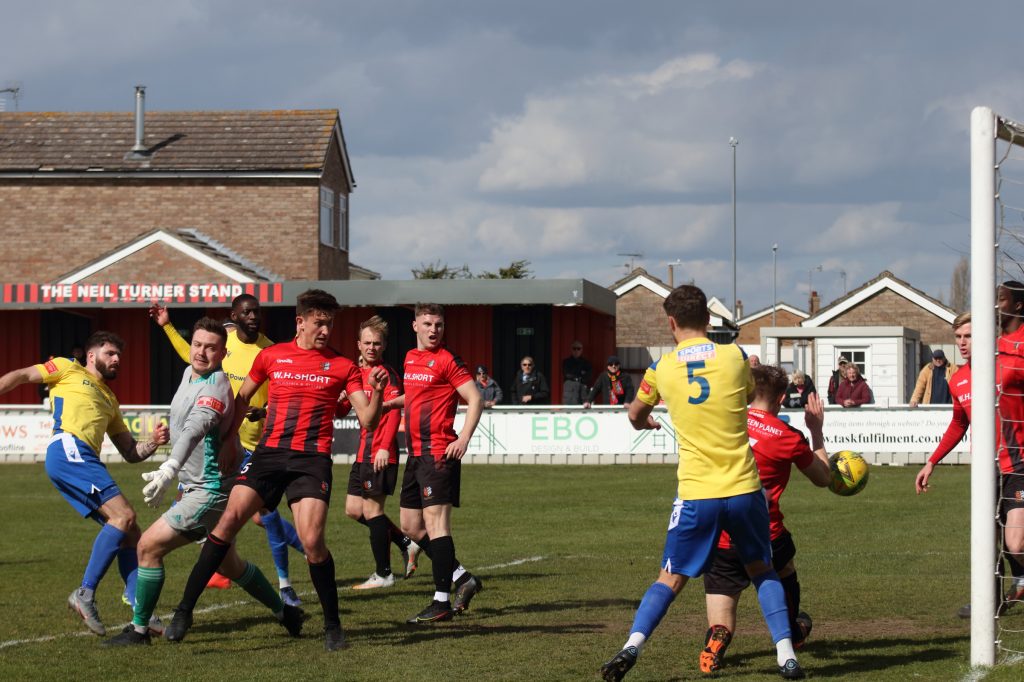 The curse of the Manager of the Month award landed on Andy Leese’s unsuspecting head as an injury-time winner from Brightlingsea’s Ollie Bell saw Enfield Town slip to their first defeat in seven games.

The unexpected setback saw the Town hold on to third place in the league, but with Hornchurch two points behind them with a game in hand going into their fixture against Cray and possibly now in the driving seat to achieve that coveted home draw in the playoffs.

By contrast, this was only Regent’s second win in 11 games but could prove vital in their battle against relegation. It must be said that their win was deserved in the light of a strangely uninspired Town showing.

With Jake Cass returning in place of the injured Adam Cunnington, the Town started the game at a gallop, having two shots blocked in the opening 20 seconds and Lewis Taaffe hitting a free kick over the bar two minutes later.

Town were comfortably in control in the opening stages, and got their noses in front after 22 minutes, when Cass fired home the loose ball (pictured) after home keeper Charlie Turner had spilled a left wing corner.

We continued to enjoy the greater share of possession for most of the first half without managing to trouble Turner again, and were not helped by the enforced retirement from the game of Jerry Gyebi after 32 minutes.

As the home side started to come into the game, Town once again conceded an annoying equaliser on 39 minutes. A cross from the right was met by a first-time effort from Aaron Blair that was probably destined to finish closer to the corner flag than the goal until the ball was deflected in via the shin of Nathan Smith who had replaced Gyebi.

With Town now facing a stiff breeze in the second half, Brightlingsea started the brighter of the sides although most of their efforts were landing in the car park.

Their winger Valter Cachicote da Rocha embarked on a mazy dribble that was almost as long as his name but his final effort was disappointing.

Town were struggling now to make any decent headway although Mo Faal hit a shot wide from Cass’ flick on and substitute Lyle Della Verde had a freekick well saved by Turner on 68 minutes. Ten minutes later Faal  thought he’d won the match, only for his effort to be  disallowed for offside as Town’s frustrations grew.

The final period of the game saw the home side force a string of corners that were dealt with by Town’s defence, before Regent administered the coup de grace in the first minute of injury time that sent the home crowd wild.

Rocha’s 30-yard freekick was partially cleared to the feet of Ollie Bell, whose low shot through a forest of legs beat Nathan McDonald to his left.

“A bitterly disappointing performance and result,” was how Andy Leese summed up proceedings. “Apart from 25 minutes at the start of the game we weren’t at it  and you get what happened in the second half when you do that.”

“We have to reset this week and get back to basic principles. We have to focus on the next game where we still need maximum points to secure a top-5 place.”